Laughing at Clive Palmer? Let’s see who is laughing in a few months... 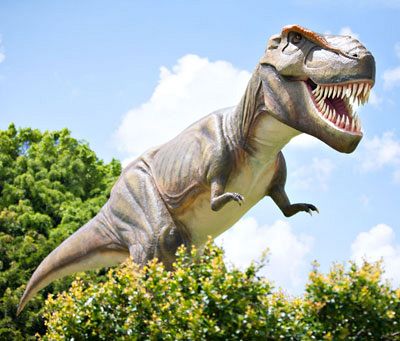 Jeff the Dinosaur, part of the cast of the Palmer Coolum Resort’s dinosaur park currently underway. Note you can follow both Prof. Palmer @CliveFPalmer & Jeff the T-Rex @JefftheTRex on Twitter :)

I watched the media and Twitter this morning having a good laugh about Clive Palmer forming his own party, United Australia Party (UAP).  All sorts of condescending comments, “You can’t buy a Government Clive”, "Clive Palmer running for office, “Clive Palmer couldn't run if you set his arse on fire!", and of course all the obligatory ‘dinosaur’ jokes...  Not to forget that  every article online & on TV is always prefaced with “Ex LNP donor, billionaire Clive Palmer...” Funny how we don’t preface others as such, though that is a rant for another day maybe?

Anyhow... The joke may be on the media and other politicians trashing Clive setting up his party.

I don’t know exactly why Clive is setting up a political party.  I don’t really know what the real fight with the LNP was about.  I know we were told it was the Qld Govt overstating how big the Qld debt was and the mass sackings that resulted from that.  He did put his money where his mouth was too, "Queensland billionaire Clive Palmer donates $250,000 to public sector union Together Queensland to assist sacked public servants".  Now, for a man that has given millions to the LNP over the years and was a life member, that was a big call to quit & give funds to the dreaded Unions?

I also know that Mr Palmer, regardless of the buffoon persona, is no dimwit.  Unlike most high profile people, he will happily take a public hit or loss for the sake of getting the bigger win.  His very public fight with Hyatt Coolum is only one example of this.  Clive wanted the resort, just didn’t want Hyatt managing it, they had a contract in place, Clive tried to terminate it, he fought it, he lost...  Everyone smirked, many getting a vicarious pleasure from Clive supposedly not getting his own way with the supreme court, having to do a private deal with Hyatt.  But, Clive didn't really lose the case at all “Clive Palmer's Coolum resort to stay open but without Hyatt managing it”.  To terminate a Management agreement is a nightmare, I reckon Clive knew he would lose the court proceedings, but, Hyatt would have to show their books etc. in Court, therefore Clive actually did get what he wanted, a true idea of the standing of the business at the Hyatt, plus of course ammo from the books to do a confidential deal with Hyatt that got them out of his way.  He did similar with his ‘failed’ Gold Coast Soccer team.  Not sure why he changed his mind on it, but making the Association sack him by what he said publicly, resulted in him basically getting out of the venture scot-free and not having to pay the rest of the licensing etc...

Now how many people do you know will take a public loss and hit to their ego like that?  And on more than one occasion?  I personally think Clive is a very smart man, he sits back at the end of the day, lets the media & others have their jokes, but he always comes out the winner, yet doesn’t brag about the win, as while everyone underestimates him or jokes, he is quietly getting exactly what he wants and for the price he wants to pay?  I also find it very odd that the ‘human billboard’ as some like to call him, making fun of his press conferences, is so well known, so high profile, yet his personal life is rather a mystery?  So, who is playing who in that profile game?  Think about it?

A few people I know have done for work for him, one in particular on a regular basis, and, his summation of Clive is that he is a really “decent bloke”.  Now I trust my friends judgement, he has a pretty good bullshit radar, he reckons Clive can tell a yarn as well as the next man, but is cunning like a fox.  Contrary to popular belief, he also treats his staff very well, generally, even the lowest paid working for him is valued, so again, that does not exactly fit into the bully billionaire scenario that many in the media like to promote?  Why has no-one from his many staff rolled on him?  There would have been thousands, surely there would be great stories for the papers & magazines to buy from them?

I could give other examples of why I don’t think we should be treating Mr Palmer’s run at politics as a joke, though feel his most recent example is a great one where he is setting others up for the dump...  Now I am sure Mr Palmer really does despise Lobbyists, hell, most of us do, though Mr Palmer has focused very heavily on them in his initial press conference yesterday & again last night in his ABC interview.  Sooooo off everyone runs, laughing about a ‘Clive Party’...  Next day, Clive has another presser, says he is standing for Fairfax on the Sunshine Coast.  The jokes get funnier, more dinosaurs are mentioned, more people laugh...

But again is Clive thinking ahead.  It is assumed that Ted O’Brien who is the LNP candidate heir apparent in this very safe conservative seat and I suppose it is a fair call for the LNP to assume that since Mr Somylay has anointed Mr O’Brien his successor it is a shoe-in.   Shame a few journo’s in the recent press conference had not done a little bit of research, Fairfax was one of the obvious choices for Mr Palmer, so a little peek at Ted O’Brien would have been a good idea.  I say this because Mr O’Brien was with conservative lobbying firm Barton Deakin after ten years with global consulting firm Accenture.  Who cares you say?  Well, considering the dodgy situation the LNP are finding themselves in Qld with many sick of corporates sticking their finger in the Government pie, I am sure Clive is going to love pointing out that Mr O’Brien whilst at Barton Deakin was one of the lucky 13 at the now famous “Ros Bates ‘pre-lobby’ lunch”.  Let’s see, Mr Palmer has set up his anti-Lobby stance, his anti-QLDLNP jobs for mates ‘heartless’ stance, and Voila!  Guess what, his opposition in Fairfax ticks all those boxes with the bonus tick of being associated with the rather toxic Ms Bates, lovely trifecta...

I'll be contesting Fairfax at September 14 federal election and aim to be Australia's next prime minister #auspol twitter.com/CliveFPalmer/s…

Mr Palmer is actually a very generous man who has helped a lot of charities, usually on the condition they keep their mouths shut, so this could actually be a civic move on his part, he could actually be doing what he says, giving the public a voting choice, trying to instill more democracy in our system?  Mr Palmer could also be laying out a very elaborate smoke-screen with a very different agenda in mind?  He could be trying to put the LNP back in their place?  He could just have an axe to grind with particular Lobby Firms?  He may be getting revenge on Qld LNP by hurting Campbell best bud Tony Abbott? For all we know he had a dream as a kid that one day he would be Prime Minister? Who would know... Hell, he could just be bored?  I have no idea what his end game is...  BUT Clive Palmer did learn all he knows politically under the leadership of Joh Bjelke-Petersen, he is still a Joh man today, so what I do know, is that experience shows if you dig a bit deeper under the flamboyant persona, outlandish press conferences and bold statements, there is ALWAYS an END GAME.

Sooooo grab some popcorn, sit back and be entertained, this Federal election just got a whole lot more interesting :)