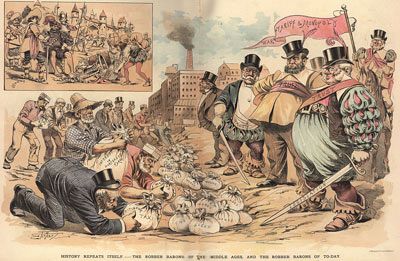 Just Who the Hell are the IPA?

Now I often enjoy the Drum, though was always annoyed by the ‘IPA Fellows’ that would appear on a very regular basis as guests. These self-assured, clean-cut gentleman (always men...) seem to be ‘experts’ on everything?

Now I often enjoy the Drum, though was always annoyed by the ‘IPA Fellows’ that would appear on a very regular basis as guests.  These self-assured, clean-cut gentleman (always men...) seem to be ‘experts’ on everything?

I am not a stupid woman by any means, not a rocket scientist, but not a moron either and the use of the word ‘fellows’ meant that I assumed they were associated with some sort of Academic Organisation or University?  To be perfectly frank, I felt absolutely stupid to be condescendingly told on Twitter, “well what do you expect from a right wing think tank paid for by big business?“ Like most adults who feel they have been made a fool of, I was angry.  I do pay more attention to the News than the average person out in the burbs, so if I was not aware of this group and their influence, well obviously millions of Australians who will be voting in September don’t either.  This is a major concern.

I have tried to educate myself, hopefully what I have learned from others and just plain old punter research on the interwebz could help you as well if you were not aware of the existence of this group and who the hell they are, particularly considering if you read Mr Abbots “Address to Institute of Public Affairs 70th Anniversary Dinner, Melbourne” and need to know just ‘who it is’ that will seem to have so much influence on public policy when the Liberals take control of Government with Mr Abbott as Prime Minister come September.*

The Institute of Public Affairs (IPA)

The Institute of Public Affairs is an independent, non-profit public policy think tank, dedicated to preserving and strengthening the foundations of economic and political freedom.  Read more about who the IPA say they are about themselves: IPA here...
Crickey actually have a full topic onsite for the The Institute of Public Affairs
Independent Australia have many references to the IPA, this one from 2011 is still relevant today “Crackers #4: The Institute of Public Smokescreens”
Sourcewatch, who call themselves the Center for Media and Democracy describe the IPA a little differently, though I have to admit I find it astonishing that a Think Tank in Australia has made the grade in a US site?  SPN: Aiding ALEC & Spinning Disinformation in the States

The shadowy world of IPA finances

I have no idea why the IPA Annual Reports stop at 2009/10 as a quick read does not tell us who is funding them at all or anything silly like that.  Which is odd, considering they are such Free Speech advocates?  Clive Hamilton wrote  an article that raised some very serious questions in regard to IPA finances, quite rightly suggesting that the Tax Commissioner should be having a peek at the IPA books?  "The shadowy world of IPA finances"
Some documented sources of income. It explains many of #abbott's proposals.  Big tobacco, oil, mining etc. http://en.wikipedia.org/wiki/Institute_of_Public_Affairs thanks to Le voyageur @P4551

These ‘men’ (only a few women on the website & we don't tend to see them on TV?) are everywhere, I know I am missing some links to very good articles in regard to their media influence, so please, if you know of what that should be included below,email it to me.
As far back as 2001 the ABC did an expose on the IPA and their motives "Stuart Littlemore - Institute Of Public Affairs - ABC TV 2001"
Independent Australia clearly showed with analysis how the IPA has insinuated itself with the exact same TV station that was investigating them a decade previously, yet nothing has changed with the IPA and it's manifesto which means the ABC has? "ABC Drums up appearances for the IPA"
Barry Tucker also has a big reminder about no scrutiny of Mr Abbott in the mainstream media & the influence of the IPA in this fact "The most important vote in a lifetime"
IPA ‘fellows’ (literally LOL! As I have stated, they are all men who get the high profile gigs) also appear as commentators on Sky News many times a week in various programming times, PM Agenda, Contrarians etc.,  Besides the Drum, they also pop up on Q&A and other so called News or Political programmes on the ABC.  Hell, I have even seen Tim Wilson from the IPA give comment on channel 10’s The Project.  They are everywhere, just look for the clean cut, well mannered, articulate young man who is the epitome of what a Young Liberal should look & sound like...

THIS is a must watch: Stuart Littlemore - Institute Of Public Affairs - ABC TV 2001 - YouTube

Again, I know there are many articles online about this, I have included a few below ranging from ex Journalist now blogger Barry Tucker to Author, writer, radio show host and comedienne, Wendy Harmer...  Feel free to email me any other references  you think should be below.
Most important is an article on the IPA’s site itself, reading this is imperative to see the plans the IPA have for this country:  "Be like Gough: 75 radical ideas to transform Australia"
Keep in mind, “long-serving director of the IPA” Mr Rupert Murdoch of News Ltd fame operates approx 70% of the media in this country?
We can’t forget the ‘Troppo Tony’ new articles a few months ago, we laughed...  We should not have.  Mrs Rinehart and the IPA have big plans for Northern Australia “Book Launch - 'Northern Australia and then some' by Mrs Gina Rinehart” at the time of the “leaked’ plan Vision 2030” the book launch for Mrs Rinehart’s book was being promoted on the front page of the IPA website?
Barry Tucker wrote a very good article "IPA agenda to re-shape Australia"
Wendy Harmer's "John Laws? I've Got Bigger Fish To Fry" Quite rightly asks: "Does the odious “cash for comment” culture persist in the national public discourse?  Do you know where “opinion” is coming from and who is paying for it?" 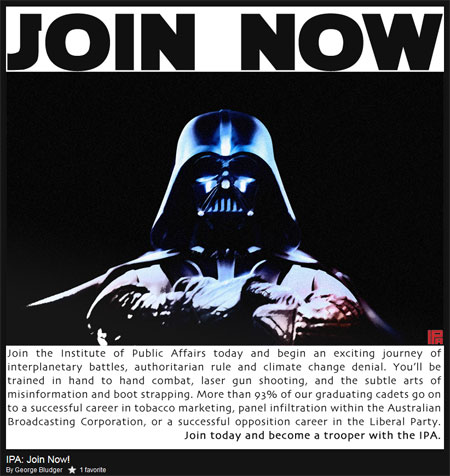 Thanks to Christopher Wright ‏@ChristopherWr11 who reminded me of the following:
I think it's biggest recent policy impact has been in seeding climate change denial in Australia (see this piece from the SMH: "The benefit of the doubt"
I believe there are academic studies charting the history of the IPA and its influence in promoting conservative and more recently neo-liberal causes. Here is one such study: "Australian Neoliberal Think Tanks and the Backlash against the Welfare State"
"This Fascist Mob" by Shane Cahill has a fascinating history of how the IPA came about thanks you so much to ‏@hank_wortel for bringing it to my attention, well worth reading & well written!
Extremely relevant contribution from Twitters favourite born again Journalist, (and mine) Margo Kingston "Howard’s blueprint for Abbott to stifle dissent" @margokingston1
Thanks to @sloughly who always helps to find those extra references :)  Great article about the Executive Director of the IPA, John Roskam "The Power Index: thinkers, IPA boss John Roskam at #9".  Interesting article from Climate Shifts "Institute for Public Affairs true colours: under fire from scientists over Plimer book mail out"
Articles on DESMOGBLOG.COM are concerning in regard to the IPA?  "James Delingpole Raising Cash for Australian Climate Sceptic Think Tank" and "Study Tracks Australian Climate Denial Echo Chamber Back to Think Tank" () actually there are number of IPA related articles on this Blog, dating back many years, This one done in March this year is very good: "Climate Denial Think Tank's Plans To Abolish Climate Change Departments in Australia".  Thanks to @GeorgeBludger for the heads up here.
Energy without Carbon ascertains that "The IPA has been at the heart of climate denial in Australia" and they could be right? via @GeorgeBludger
"Who funds the IPA? Ask your gut." via @newsfliporg well thought out and more background information for context of IPA aims.
via Kevin Rennie @Kevin_Rennie "Think our political debate is tanking? Ask the s(c)eptic celebs" really interesting information on more than just the IPA...
Focussed on Gina Rinehart and her association with the IPA, plus quite a bit of background including John Howard’s association with the IPA written by @jrhennessy "Fuck You, Got Mine", Thanks to @hank_wortel for this addition.
Heads up on this article thanks to @marygarden "The IPA’s 70 year struggle against class war"  by @donattroppo
The Failed Estate written by @MrDenmore has a great post called "Freedom for Whom?" comparing the IPA version of 'Freedom' to the 'reality' facing Journalists.  Thanks to @scottyhau for the heads up on this one.
Really good look at what IPA policies above that Mr Abbott has agreed to implement by @newsfliporg "Workers as property: Assessing the implications of IPA policy"

I know I could be paranoid, maybe I am reading too much into this organisation, I am just a dumb punter of course?  Though as Ms Harmer states: “Watch out instead for the IPA and their like – the white pointers in the shallows. Their bite can be fatal.”

UPDATE: 3.25pm 7th April 2013 -  Petition "Tony Abbott, Leader of the Opposition: Clarify which of the IPA's 75 policies the Coalition plans to implement." via Tom Cummings @cyenne40

Cheers
Noely @YaThinkN
*Yes yes I know that we actually have that inconvenience of getting out on the Saturday to actually vote for our Federal Representatives, but every single media outlet and political commentator is telling me that I really should not bother as Mr Abbott is our PM in waiting.  Silly me, think I might actually cast my vote for MY CHOICE as is my civic right, regardless.  I suggest you do too!

Excellent Graphic above is courtesy of the very funny AND very talented Mr George Bludger, you should follow him on Twitter @GeorgeBludger
PS: I have included a link to the wonderful graphic above if you would like to see it in a larger format for more detail.