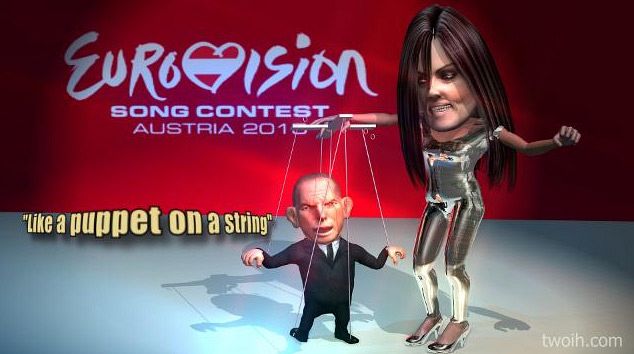 Is our PM an incompetent leader? You bet you are... You bet he is

Considering the stick up the butt attitude so many in Government have, I prefer to go the mocking route in regard to coping with this current PM and his Government. Yes, it may sound petty, but it is a survival mechanism that is tried and tested, “if you don’t laugh about it you will cry”. Yesterday, I was pushed too far, way too far.

Considering the stick up the butt attitude so many in Government have, I prefer to go the mocking route in regard to coping with this current PM and his Government. Yes, it may sound petty, but it is a survival mechanism that is tried and tested, the old adage, “if you don’t laugh about it you will cry”. Yesterday, I was pushed too far, way too far.

So it seems that when Mr Abbott saw the report from the US Think Tank questioning “'Is Tony Abbott the most incompetent leader of any industrialised democracy?'” he read it, took it as a challenge to up the stakes and thought “you bet you are... you bet I am” and went out to prove it, the very next day.

Yesterday, Day 4 of so-called Good Government was all over for me. The Budget Cuts announced last year depressed the hell out of me, but yesterday... Yesterday just saddened me. It was the first day of this Government where I could not find not one thing to laugh at or mock, nothing, just sadness.

Keep in mind, this all happened on ONE day, one bloody day :(

We received a terrible report headed by the eminently respected Gillian Triggs about the impact on hundreds of children detained in Immigration Centres under our control.  Kids.  Children who could be ours... As a parent, I could not get through the whole report “The Forgotten Children, Australian Human Rights Commission”, it is shameful, an indictment on our nation that we have been allowing this to happen.

Instead of accepting the report, thanking all those involved for their efforts, our fearless leader attacked both the report and Gillian Triggs? Talk about shoot the messenger? The ridiculous aspect of his attack is that not only his current Government was targeted, the report covered both the ALP & Coalition period of oversight? That was not enough though, this was the real kicker for me, as a parent, to not qualify this statement better, is just beyond me...

Prime Minister Tony Abbott was asked on radio if he feels "any guilt" over the treatment of children in detention centres.

"The most compassionate thing you can do is stop the boats."

No empathy? Just the stupid, we stopped the boats rubbish. EVEN if you can give the PM the benefit of the doubt that he honestly thinks stopping the boats is saving more lives – not that we would know as it is all so secretive, we actually have no idea how many have died in turnbacks or turning a blind eye to damaged boats at sea – you would have thought a decent human being would have at least added something like, “As a parent my heart goes out to these children but...” Now that would not have been too hard to say? Instead what do we get, more anger at the messenger:

Prime Minister Tony Abbott attacked the Human Rights Commission saying it had engaged in a "blatantly partisan political exercise" and "ought to be ashamed of itself".

Don’t worry though he didn’t leave it at that, he kept up the irrational rhetoric all day. Even accusing the Human Rights Commission of producing a “transparent stitch up” in Question Time, yep, that is our Adult Government SIGH!

As a side note, don’t be thinking in this regard that I am happy about the ALP’s inaction on this issue either (Marles weasel words are just pathetic), though this particular rant is focussed on Day 4 of Good Government and Mr Abbott himself.

I can’t call this Mr Hockey’s second budget, as well, barely any of the first budget has actually gone through. Now Mr Abbott is trying to get support for his Childcare package, that is good, should be bipartisan discussion. Good Government obviously does not include looking at the budget...

Delusional, Mr Abbott – still – doesn’t think there is anything wrong with his budget? Still will not admit it isn’t fair, in fact insisted the only thing the Government got wrong with its 2014 Budget was:

that it had “failed to get legislation through ... a senate controlled by our political enemies” and that the only promises he had actually broken were spending cuts to foreign aid and the ABC.

Who the hell says that? “controlled by our political enemies” FFS! That is the sort of hysterical statement you expect to read in some long lost history from a grasping King in the last throes of syphilis?

Yeah... I got nothing on that one, too many said too much and I normally have faith in my ability to comprehend reputable reporting of news, but quite frankly, I don’t think they know where we are at with this either? I strongly suspect the Coalition themselves are not really any wiser as to what is happening with that one. We really should have a statement from our PM to clarify this situation, considering his ‘form’ on Day 4 of Good Government, I’m sure it would have been ‘interesting’ to say the least.

I won’t even get into the detail of this idiocy... I realise that Mr Abbott thinks the #TerrorFret is his best friend, it is pulled out whenever he is struggling badly in polls, BUT to potentially screw up a trial with detailing alleged evidence in Parliament? IF these people are as dangerous as we are told well he might have just screwed the pooch for the AFP in actually prosecuting them. Well done Mr Abbott. *Slow Clap*

Though I suppose we should not be surprised, the Public Relations value of Terrorism has always seemed to be more important to Mr Abbott – in my eyes – than the actual ‘reality’ of protecting the citizens in his care. How many have died this year alone from Family Violence? But instead we get "Look over there.... OMG Death Cult". Guess it is a higher calibre of keeping the population afraid than the Qld LNP's "OMG Look over there Bikies"... Liberals use the same marketing strategists?

I won’t even start on the Subs, that like the co-payment is another mess that no-one really knows what is happening with. My personal opinion is that the Government can’t really answer the question as they probably already promised the contract to the Japanese to secure the earlier Trade Agreement, then again, could just be me being too cynical again.

January figures came out and were not pretty, in fact are up to 6.4% and sadly that is the highest since 2002. Fun Fact: Mr Abbott himself was actually Minister for Employment, Workplace Relations and Small Business in 2002.

You would have thought that Mr Abbott had screwed up and embarrassed himself and the nation enough for one day, but no... You have to give it to the bloke, when he sets out to have a blinder he does excel himself. When questioned about the jobs in #QT we got:

the "holocaust of jobs" lost under the previous Labor government

Maybe I am too cynical nowadays, though I seriously doubt it was a slip of the tongue as many media commentators suggest. Mr Abbott withdrew very very quickly with no prompting? Have you watched #QT? That rarely happens and definitely not without prompting to let the point hang in the air for a bit more ‘impact’. I can only assume that this outrageous phrase was pulled out on purpose as a weapon of mass distraction.

Sadly it worked too. At the end of the day, instead of people questioning the range and variety of very serious issues that came out yesterday, 12 February 2014, we had “What the hell was he thinking...” musing, not real analysis. Too much happened in one day, too much CHAOS - Aah remember the previous Govt chaos? Good Times - and ending with such a shocker that the Press Gallery must have just needed a bex, cuppa and a lie down, too exhausted to report and inform the public as to what really happened on this whole fiasco of day 4 of Good Government?

Anyhow... This is just one day and I have summarised, ONE DAY... I could not even bring up the effort to ‘mock’ the Government. I was just too sad, too depressed that this man and his mates are actually running my country. All I can comfort myself with is, Thank Hell we are not a larger nation like the United States, imagine the damage he could wreak on a world wide scale with a world stage?

YO! You 61 Liberal MP’s who backed Tony Abbott on Day 1 of ‘Good Government’, not really working out so well... For You, PM Abbott or us :(

Sorry guys, I got nothing...
Noely

PS. To end of a more cheerful note, #TISM4Eurovision is a 'thing', ramping up an already bizarre situation to that next level - as we do. Have a gander, it will give you a smile and hell knows we need it ;-)