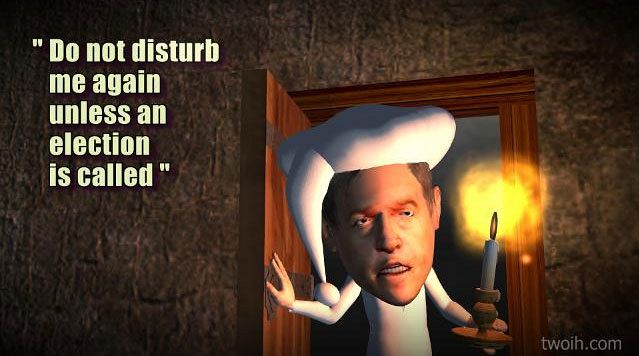 Sadly for Bill Shorten, the biggest threat to Tony Abbott & the Coalition not getting a 2nd term in Government is Bill Shorten stepping down as ALP Leader and new non-Union tainted Leader taking his place. If the last 48 hours of news reporting on Bill Shorten are anything to take seriously, then that nightmare could be imminent for Mr Abbott.

Sadly for Bill Shorten, the biggest threat to Tony Abbott & the Coalition not getting a 2nd term in Government is Bill Shorten stepping down as ALP Leader and new non-Union tainted Leader taking his place. If the last 48 hours of news reporting on Bill Shorten are anything to take seriously, then that nightmare could be imminent for Mr Abbott.

As many of you know, I have been feral with the ALP in recent months, the waving through of the so-called ‘Tranche’ of National Security laws has infuriated me. I fully comprehend they don’t want to be wedged on National Security as in the bullshit reality TV style political shenanigans we have nowadays, as that would hurt the ALP in the polls. BUT there was nothing stopping them ensuring amendments were put in place to safeguard abuse of power and potential harm to innocent Australians, this they could have done and still looked strong on National Security, stronger in fact. Sadly, the lazy option was taken and it is yet to be seen if the recent ‘questioning’ of Citizenship stripping is just huff & puff from the ALP and in the end they will just roll over on that too.

Abbott has already fired the warning shot that he will make them look bad in the media with his ridiculous "Labor wants to 'roll out the red carpet' for terrorists" which The Australian and other media know will play well out in Bogan-Land :(

I will also add in the disclaimer that I was not a fan of Shorten getting elected as Leader of the ALP. He could have been the most decent bloke in the world, but with Abbott ALWAYS going to allow a witchhunt against Unions once he became PM, I considered this a dumb proposition, even if Shorten is/was squeaky clean, some of the Union smear would still be attached to him, either real or confected. This was always going to happen. A good friend of mine has met Bill and thinks he is a thoroughly decent bloke, so this kind of makes that situation worse, as ethically I personally hate the political PR games played, but as a punter, I will selfishly think of myself and my best interest is seeing the back of Abbott & his mates.

So having said that, I would still prefer the ALP to be an effective Opposition as quite frankly, at this stage of our electoral cycle with the damage this first term Coalition Government have done, I would be supporting the bloody Mongel hordes if I thought they had a chance of punting out Abbott & Co.  Bill Shorten being leader of the ALP has always worried me. Talking to punters they either don’t have a clue who he is, or don’t like him “Coz Unions ya know...”. The only people who seem to be fans are the full on ALP supporters, they could be right too, he could be a great Leader, he could be awesome at his job, he could be the biggest sweetheart around? BUT sadly, as we know, timing is everything.

Is Time up for Bill Shorten now?

It may not be fair to Mr Shorten, but sadly certain segments of the media have backed up the Governments crusade against Unions and regardless of any pros with Bill as Leader, they will never outweigh the cons in this political climate.

#TURC the Trade Union Royal Commission has not quite turned out to be as useful at Mr Abbott wanted, but finally, the millions spent on it may actually result in hurting the ALP with pieces like this appearing in the non-cheerleading media “Bill Shorten's union took hundreds of thousands from building company”. For me personally, I can’t see that Mr Shorten did anything terribly wrong here, maybe I’m thick and missing something in the story? Regardless, the comment at the end of this piece is most interesting...

“Bill Shorten - Australia's alternative Prime Minister - is one of Australia's best known faces but least defined characters. Fairfax reporters Royce Millar and Ben Schneiders have dug deep to investigate the Opposition Leader's past and present, exploring his character, his politics, his allegiances, and the deals that have put him so close to power. The explosive results of that investigation will be revealed over the next four days.”

The very next morning #KillBill is ramped up to the next level with a Fairfax editorial, yes an Editorial, no election on the horizon, yet the paper felt the need to do an Editorial? “Bill Shorten should consider his future amid AWU revelations”.  Maybe I’m reading too much into this, but does Fairfax really have more “Explosive” dirt to dish out on Bill Shorten and are just pre-empting the “next four days” of exclusives?

Either way, the tone really has changed. Prior to the last few days, it was only the News Ltd Deathstar that was on the #KillBill bandwagon, now the theme appears to have moved further afield. Consider these pieces in the last 48 hours alone:

Ok that last one is satire, yet is probably the most accurate out of the lot. Seriously? The only reason why Abbott is not already out on his arse is because the Opposition and Bill Shorten have been pretty ineffectual at capitalising on the multiple stuff-ups this Government has done.

The millions of our taxpayer dollars that Abbott is spending on #TURC may in fact be an own goal for Abbott.

If the ALP suddenly get a ‘popular’ Leader with real bite to take on the Abbott Government the polls in recent months could be considered the glory days for Mr Abbott, as quite frankly, most punters out there in Bogan land really are not aware of Bill Shorten yet Abbott still polls as badly as he does?

To make matter worse for Mr Shorten, it looks like he may have lost his Union Powerhouse backing in the ALP itself too if “Labor powerbrokers lose control with reform back on the agenda” is correct in its summations as to just how powerful these Unions are in the ALP? Most important to note here is that the ALP triennial conference will be held next month and there could be a few surprises come out of that too?

Considering what has happened with Leadership in the ALP in recent years, compounded in the Australian mind yet again with the ABC showing the The Killing Season, it seems that Bill Shorten is besieged on one front too many. Yet the ALP truly are wedged for once as they can’t just toss out another leader in this political climate?  So what will they do?

Taking all of the above into account, #KillBill may not be fair, may not even be justified, but we know what happens once the media get the scent of a wounded politician? It is isn’t pretty.

As someone who really does want the ALP to be successful and get rid of this odious Government we currently have – think what they will do if they get a 2nd term ie. MANDATE for a free for all as far as they are concerned – and if I was not confident of Bill Shorten leading them to Government 12 months ago, I don’t think there is a snow flakes chance in hell of that happening now. Miracles can happen, though not in Politics and if my suspicions are correct and more dirt is about to shower down on Shorten, the best spin doctor in the world can’t dig him and the ALP out of that hole.

Hopefully the ALP advisors are looking outwards and not inwards for a change. Maybe they will find a way for Mr Shorten to gracefully bow out as Leader and allow the ALP to truly draw a line under the previous leadership nastiness giving them a fresh face and ability to truly take on the Abbott Government at the next election?

Then again pigs might fly as ‘gracefully bowing out’ and ‘political leadership’ are two phrases that rarely fit in the same sentence, sadly :(

Personally, Mr Shorten saving a primary school bus full of mixed race and religious denominations from an oncoming train, is about the only sort of miracle I could see saving his Leadership and ingratiating himself with the Australian public enmasse if the majority of media are not onside?  Although even if that dream scenario were to unfold, the camera would cut away to show the latest Team Australia #TerrorFret with eleventy flags (or whatever number the count is up to) press conference instead of Bill the hero.

Who knows what is going to happen? All I know is that in this media landscape it is difficult for the ALP messages to get oxygen and with the non News Ltd media now also going Shorten, that is just not a tenable position for a political party to be in if they want to win an election?