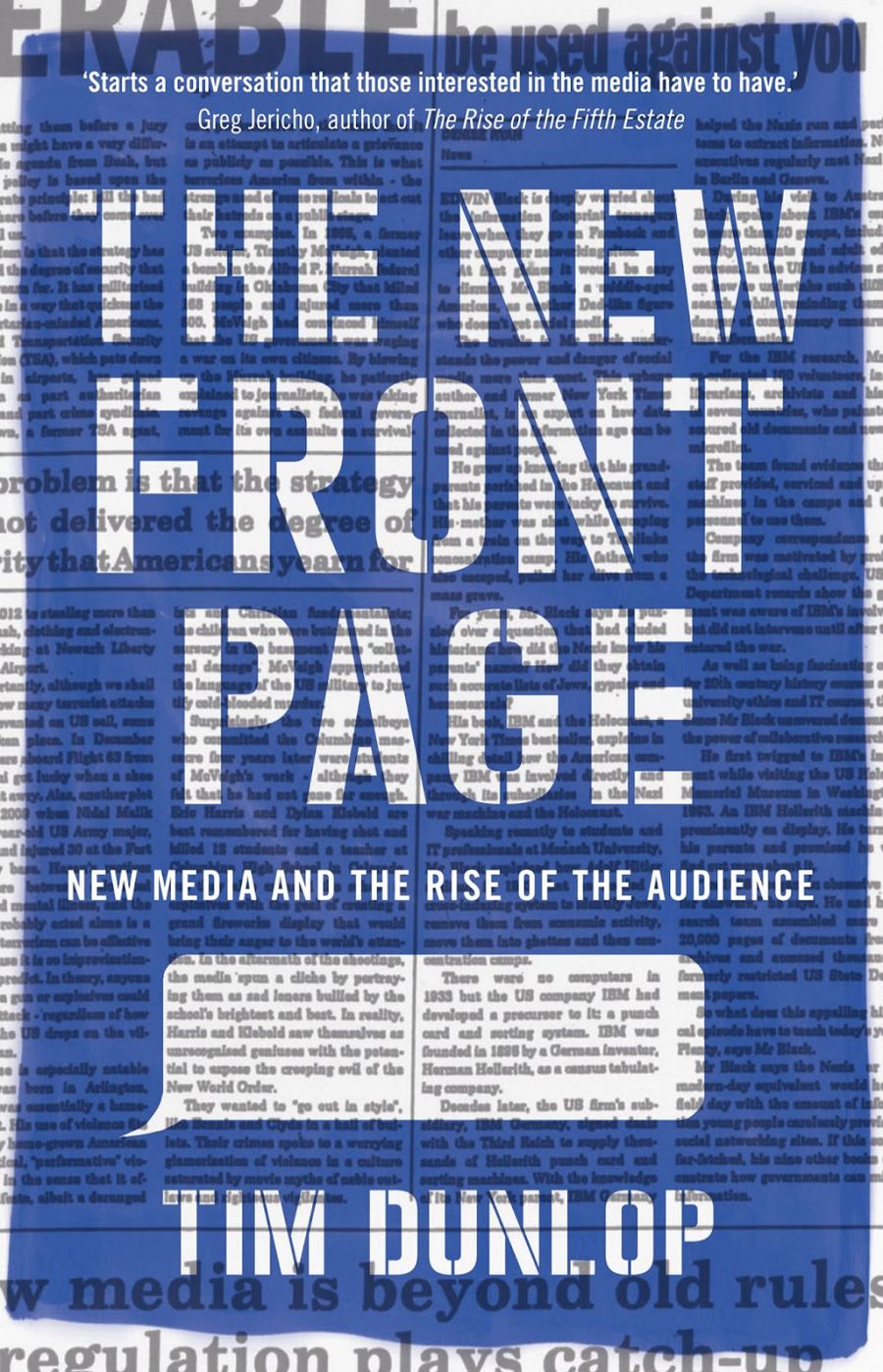 I am the audience of The New Front Page

As a punter, books written on media, particularly ones based on the relationship between traditional media institutions and the internet fascinate me. Not because I have any wonderful attraction to wanting to be a journalist, I am quite happy in my small business, the fascination is because I am avid devourer of news who happens to actually work in the IT industry. I felt that I had to put this disclaimer first when discussing Tim Dunlop’s book, “The New Front Page: New Media and the Rise of the Audience” as obviously unlike many who will pick up Tim’s book (and hopefully many do), I am not a media insider, I am the ‘Audience’ Mr Dunlop refers to.

As a punter, books written on media, particularly ones based on the relationship between traditional media institutions and the internet fascinate me.  Not because I have any wonderful attraction to wanting to be a journalist, I am quite happy in my small business, the fascination is because I am an avid devourer of news who happens to actually work in the IT industry.  I felt that I had to put this disclaimer first when discussing Tim Dunlop’s book, “The New Front Page: New Media and the Rise of the Audience” as obviously unlike many who will pick up Tim’s book (and hopefully many do), I am not a media insider, I am the ‘Audience’ Mr Dunlop refers to.

I am also one of the people on Twitter who sees the awful disrespectful tone of the #MSM hashtag being applied to anything in the media that some on Twitter disagree with.  I have also done my fair share of whinging when I can’t comprehend why something is not reported that I feel should be, or when I am told by journalists that “I don’t understand the context” or “It’s just politics, that point is not important...” etc.  Though I do understand that many are doing a job, they have editors, they don’t normally choose their own headlines and often are overworked.  What I did not understand until I read Tim Dunlop’s book is why so many Journalists are aggressive, aloof or blatantly ignore you when you do ask a polite question?  Not all mind you, though many do, often making me wonder why some journo’s are on Twitter, as it is interactive, though it seems quite a few like to chat amongst their own elite professional group, with the odd tweet to the unwashed masses flogging a piece they have written.   As a person on Twitter who asks too many questions, this comment really appealed to me as I have thought to myself, “Hello, do you want me to buy your paper or subscribe at all”?

“Commenters, and those who speak to you via social media, are not the enemy; they are the audience.”

“The New Front Page” gives an excellent, easy to understand though still detailed explanation as to how we have come to the stage we are at now in the relationship between traditional media and online interests.   Tim Dunlop has done a serious amount of research and I for one thoroughly appreciated it.  Many authors writing on contemporary topics tend to forget that the reader may not be au fait with the history surrounding that topic and gloss over even limited explanations, thankfully this is not the case here.

Not that the reader is treated like an outsider who knows nothing about the industry, instead Tim has subtly included the reader into the information that he is imparting.  As anyone on Twitter would know, there is a hard core cadre of people who watch the news, journo’s & politics like a hawk, though most of us slide in and out due to ‘life’.  I for one was not aware of how blogging got started, I was not aware of how Newspaper’s in the US first handled them, hell, I was not aware of the disconnect between reporting of the Iraq War and what experts were saying online?   Margo Kingston and I arrived on Twitter at the same time and luckily happened to interact and got to know each other by chance.  I knew that she had been an ex-journalist, I knew she had an interest in citizen journalism, though I had no idea as to how important her contribution in the form of ‘Webdiary’ was back in the early days of newspaper online experimentation and now have a much better understanding as to why the progression of offline to online news has been so slow and often erratic.

This sort of background knowledge is important to understand how we have reached the awkward stage we are at now.  Oddly, given the pieces I have read on The Drum from Mr Dunlop, I would have expected this book to be more of a criticism of traditional media.   It is in fact not.  If anyone was expecting a full on bashing of the mainstream media they will be disappointed.  This is not to say that faults and mistakes in the media are not pointed out, they are, though in a thoughtful, more questioning way as to what went wrong or is going wrong and various solutions or positions could be taken by media organisations in the future to ensure they stay viable, but that we don’t lose quality journalism as a casualty of mainstream media survival.  In fact, Tim seems to be more concerned about democracy and having informed citizens, he is not a limited, online only fanbois as this quote below referring to the role of Journalism being fundamental to our democracy illustrates.

“Critics on social media and elsewhere are quite correct to point out how badly the mainstream often does this work, and all power to them.  But no matter how righteous such complaints are, the fact is – and let me put this bluntly – democracies need a mainstream media more than they need citizen journalists.”

I understand there will some in the Journalism fraternity that will not be happy with some of the examples of media failures in this book, though Tim Dunlop is not relating these examples as a means of hitting out at the media, more as a study in what has gone wrong in the past and maybe what the media should be aware of to make themselves more important to their audience.   Both media and politics are treating citizens as a demographic to be marketed to, instead of citizens or audiences who should be listened to and catered to.  Punters can’t make good decisions without good information and maybe if we received solid, fact based information from the media, we then as citizens may make better informed decisions which would result in better democratic choices.

I truly hope that all Journalists and media experts do read this book, you may not agree with all that Tim Dunlop has to say, though at least think of the questions he is raising with an open mind.  To all social media punters, I would also suggest you read this book as it will give you a better understanding as to where many of the Journalists are coming from and how we can both ‘assist’ and ‘insist’ that we as the audience are actually catered to at the level we expect.  For bloggers, again, I would suggest you read this book.  Most bloggers I am familiar with are not in fact ‘pretend’ journalists at all, though they are normally curious and questioning in nature, “The New Front Page” will both answer some questions for you and at the same time give you more to think about.

This book was not quite what I was expecting it to be, though I’m far from disappointed.  It is a bookshelf keeper to be referred to again over time, to be the base of discussion & debate on the back deck over drinks, for that Tim Dunlop, I thank you and look forward to more stimulating, thought provoking writing from you in the future.