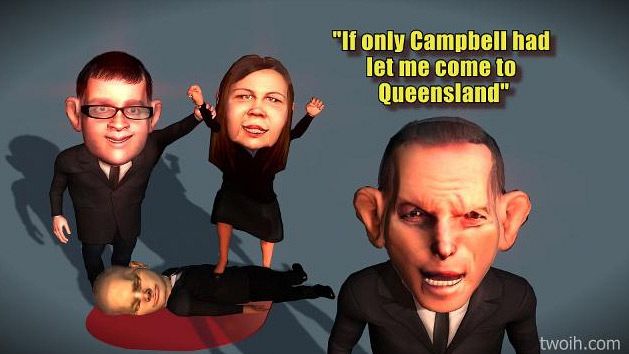 I have to wonder how many other Joan’s around the country affected the Victorian election and are responsible for a good chunk of Mr Abbott’s current woes as well? Graphic: @TwoEyeHead

A funny thing happened on the weekend, Queenslanders ignored historical convention, a shipload of advertising and the wishes of the Courier Mail to say, “Yeah, no... Don’t think so Campbell”.

Many like myself hoped for a Hung Parliament, only hoped, honestly didn’t think that could happen, the war chest of the LNP was just too big to compete with, Electorate Bribes in marginal seats were massive, I’m talking Football Stadium massive, literally ;-) But I still had my Hung Parliament hope, and daggy though it may be, it came from Facebook.

Now this is where it gets weird, both for myself and for others politically and why I think it is all Joan's doing...

There is so much ‘polling’ and both the politicians and the media rely on them for fire-fighting on contentious issues or in the media’s case, reporting. Fair call, most of those companies are reputable. They also rely on focus groups, I am not so sure whether they are successful, but anyhow they stake a fortune on those results. As an aside, whatever firm came up with “Strong”, don’t ever admit it, many of us will hunt you out of the country.

Therefore Sunday was all “OMG Volatile electorate”, or “OMG it is all Tones fault”. In fact, I don’t believe it was. Yes, An awful lot on Twitter are claiming it was Social Media that changed the result – something had to combat the Courier Mail & the Australian – but I think that is only sort of right. I actually think it was the mums and dads on Facebook...

See I did a bit of pub polling. Asset Sale was a big deal, BUT it depended on where you lived what the biggest deal was? Public Servant sackings are a good example. Back in the old days – 3 years ago LOL – we saw a big company sack a 1000 workers, we all felt sorry for them, but rationalised, oh well, dying industry, not much could be done. Pretty much, sorry for that electorate but doesn’t really affect me. This time in Queensland, the sackings were state-wide. The LNP thought they could get away with it unscathed as it was in pockets all around the state, the problem is, families chat on Facebook. Below is a real post: (Joan is not her real name for obvious privacy issues)

Joan: Terrible news today daughter in law has lost her job, not sure how they are going to support the kids & pay the mortgage on one wage. Guess Jim & I will have to think about moving closer to help out.

Now, Joan has over 100 people on her Facebook, over 45 of them (when I viewed) had made sympathetic comments, in fact, many related similar worries and more than 20 of them ‘shared’ that post.  Public Servants being sacked suddenly became real people being sacked to hundreds of thousands of other people. These sackings were not ads or spin, they are someone’s mother, son, father, daughter-in-law, and sibling you name it from all walks of life in all sorts of job.

Looking at Joan's post, in the social media world, just over a 100 followers is not massive, BUT all Joan’s followers are friends and family, they are ‘quality’ connections, who are then sharing, chatting in real life, relaying Joan’s pain to other ‘quality’ connections. Bit more powerful than the old chat over the neighbourhood fence?

Let’s see, conservative figures say over 20,000 have been sacked in Qld in just under 3 years. So extrapolate out that figure in the Joan family & friends Facebook scenario if each of those 20k has even 50 close family & friends on Facebook alone?

This sort of micro social media connection happened over & over again with Asset Sales, The Great Barrier Reef being protected, The CMC being muzzled, The Fitzgerald interview, Prices of Electricity - believe you me, I think I saw the electricity bill being bitched about way more than Asset sales or at the least mentioned in conjunction with it – you name the issue, there was ‘micro social media’ onto it.

The Joan’s on Facebook don’t usually belong to a political party, they may feel more inclined to one or the other parties, but are not rusted on (most are probably generational voters). They are just people, telling other people about their lives. I have no idea how future elections are going to be gauged to get a ‘feel’ for the electorate when they can’t possibly get a handle on the Joan’s chatting with family & friends like that? Now I know for a fact that Joan’s local paper was a serious cheerleader for the LNP, combine that with the Courier Mail, that is pretty strong “LNP News”. Joan’s area was also held by an LNP MP who offered quite a bit in bribes, yet come election day, the LNP didn’t get over the line in that seat?

This happened in many areas of the state and I can only think it is the Joan’s that did that.  The LNP may have arrogantly told us that they had to make “Strong Choices” to implement their “Strong Plan” to get Queensland out of the red, but Queenslanders saw the LNP getting lovely pay rises, swanning around in corporate jets, sitting at $5,000 dollar fundraising dinners etc., while Joan was worried about having to move from their family home closer to her kids family to help them out with the mortgage & grandkids while the daughter in law found another job in a depressed economy with rising unemployment?  Joan wasn’t spruiking for a political party. Joan was sharing her pain and getting support with family & friends on Facebook?

Political Parties and Media can’t gauge all the Joan’s to predict elections, it is impossible, they are all over the shop, on Twitter, on Facebook, hell even private networks with schools and similar? They don’t belong to big ‘industry groups’ like Unions or Business Networks but there are millions of them?

I think it will take a while for both the Media and the Political parties to catch on to this phenomenon. The likes of Joan were not on Facebook 3 years ago, they have taken a while to overtake the teenagers on Facebook, but seem to be increasing daily, half the time they join Facebook to keep in touch with what the grandkids are up to, or to brag about them :)

As political party membership is declining they will need to connect with Joan & co.  I do mean connect as opposed to the catch cry of re-connect, otherwise we would not have had the seesaw flip this election.   Joan & co are increasingly sharing their lives & concerns socially to a broader audience, and quite frankly, Joan’s family & friends – and the people they pass Joan’s ‘news’ onto, and they pass on to, and they pass on to... you get the idea – are of a higher calibre of ‘information’ or ‘news’ than what the actual ‘News Organisations’ are telling us.

People are more inclined to view from Joan’s eyes, than the newspapers slant. People trust Joan, they care for Joan, Joan is legit, Joans story is passed on & shared by more Joan’s. Hell, even if you are rusted on LNP, do you sit there, in front of family members & friends on Facebook and try to defend your dear leaders decision? I think not.. Unless you are a deadest heartless dickhead and no-one would like you anyhow if you were, defending dear leader would probably only garner Joan more sympathy. LOL

The millions of Joan’s are not representative of any particular political party, In fact, if you asked Joan, she thinks politics has nothing to do with her. These are people who are seeing & feeling in real time the actual true life results of the POLICIES which translate to Political slogans in the media.

Obviously in Joan’s area, more listened to the likes of Joan at any rate? So maybe it is not so much a ‘volatile’ electorate, more that politicians and media are NOT listening to the ‘electorate’?

Guess parties will just have to govern for ALL people instead of yelling at us. Keeping their promises probably wouldn't hurt either.

I don’t blame media for getting it wrong, how could they keep an eye on all the Joan’s, but I do get sick of the lame reasoning as to why they got it wrong & trying to massage BS as to how it was not their fault. Maybe like Pollies, just give us good information, do your jobs properly, then leave it up to us voters to decide if a policy is a dog or not? You won’t guess wrong then?  Same with pollies, you can’t hide nasties anymore, you can’t spin your way out of them and you sure as hell can’t yell the same bloody slogan at us a million times and think yelling louder will convince us. You can whine about how ‘we didn’t get the message’, but the fact is, you can try to sell that message in as many ways as you want, but the fact is, the message won’t smell any prettier when the message itself is shit. Worse for the pollies, they can’t pay a ‘consultant’ to negate the Joan’s of the nation?  Now that is seriously something for both media & political parties alike to ponder?
Cheers,
Noely
PS.  Obviously the Prime Minister has not paid attention to Joan either judging by his Qld & Vic voters "fit of absent-mindedness" #NPC comment to explain their recent changes of Government?
Backyard Fence graphic kindly provided by the wonderful @archiearchive