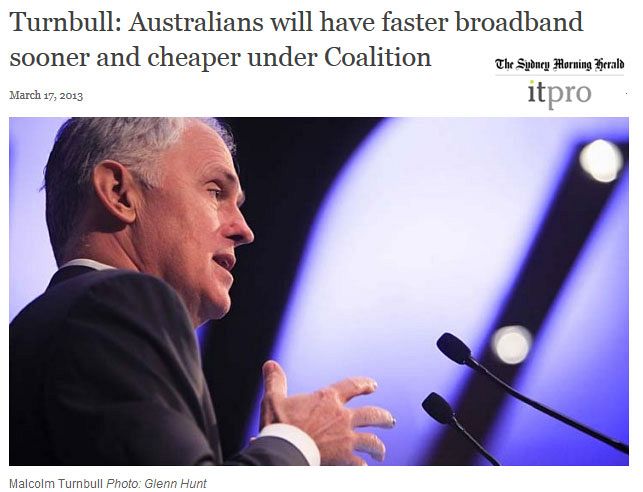 Collaged screenshot from the Sydney Morning Herald, 17 March 2013 reporting of Coalition policy with the oft repeated line "Faster Broadband sooner and cheaper under Coalition" http://www.smh.com.au/it-pro/government-it/turnbull-australians-will-have-faster-broadband-sooner-and-cheaper-under-coalition-20130317-2g8h7.html (link to this article also in body below)

We need your help.  This is a larger survey than what we did prior to the #MyBroadbandvReality submission to the Senate Select Committee on the National Broadband Network as obviously the Government does not comprehend how imperative fast stable internet connections are for Australians currently and for our future.  The NBN as we 'expected', died this week.  ZDNet kindly said "Turnbull walks away from NBN high ground claims".  Those of us that care about the NBN would call it a "broken promise" or "death of the NBN as we know it" :(

Sadly it died with a whimper, worse, it has had very little media exposure at all.  This morning (13 April 2014) it was not even mentioned on Insiders nor is there a peep of it on the likes of arguably one of the biggest online news sources in this country http://www.news.com.au/technology/online/nbn.  Pretty much, unless you follow 'real' IT news or Social Media you would not even be aware of this massive change that will affect the entire nation.

As we found in our submission data, it wasn't that people were not interested in the NBN, it was that they didn't understand it and no-one was asking them.  We ARE ASKING YOU!

Survey will stay live until the end of April 2014 so please spread far & wide for us :)

On the 9th of April it was announced "Malcolm Turnbull locks in multi-technology NBN".  Note, this was done without any sort of Cost Benefit analysis at all (something Mr Turnbull was very concerned about when in opposition), not to mention it breaks the promise of just what we would be getting on the Coalitions broadband and of course I won’t even get into the ethics as to how this decision came about, nor our purchasing of Telstra’s Copper network under the advice of ex-Telstra head Mr Ziggy Switkowski?

What is concerning is the fact that the MyBroadband site data will still be used for deciding how the rest of this infrastructure will be rolled out.  (I can’t call it the NBN anymore as there is obviously nothing National about it).  Though I do note since our original survey the MyBroadband site is now asking for feedback from punters, make of that what you will.  The second major concern is that the Government obviously has no idea what we are actually using the Internet for, how what we currently have is barely functioning for many of us now and future projections show that we will be requiring a hell of a lot better upload AND download speeds.

For this survey we need your help, not only do we need you to fill it out please, we also need you to spread far & wide to get as many respondents as we can.  We are asking the same questions as last time (though allowing for more time as we don’t have a Senate submission deadline) and we have a few extra questions as to your electorate, whether you have NBN yet or not, if you can currently see it planned for you, and a check box for what you are currently using the Internet for.

We thank you in advance for taking the time to do this for us. We hope that we can get 1000’s of responses to put the data together to give to all the Senators on the ‘Senate National Broadband Network Select Committee’ and of course to disseminate to as many members of Government and media as possible to raise this issue and get some attention for it.

Thankyou
Noely, Paul & Pascal
#MyBroadbandvReality Senate Submission Team
and the many wonderful other people who help us with this endeavour