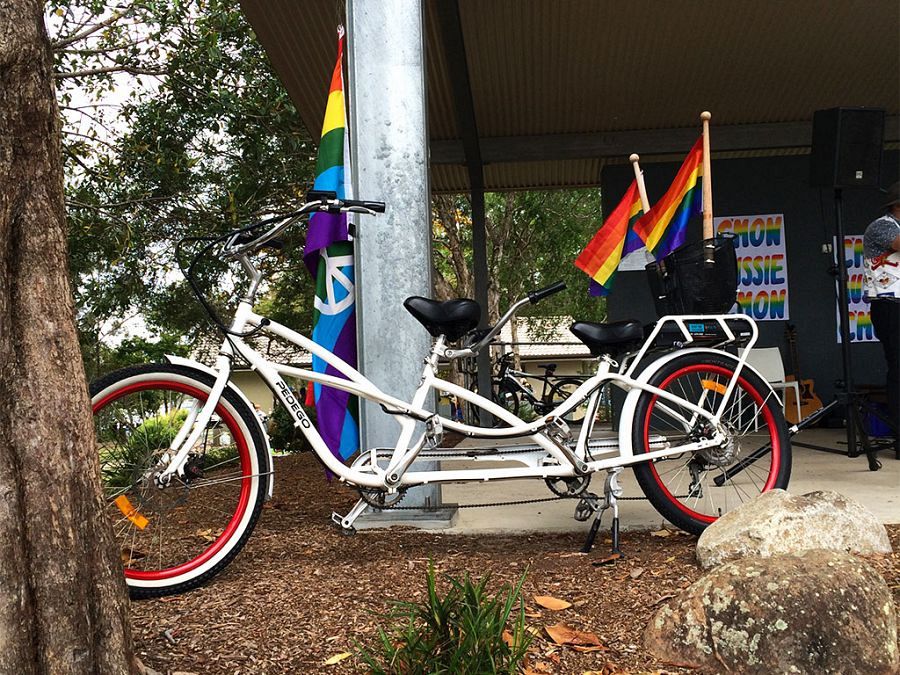 Cmon Turnbull, on yer bike & get on with it, no excuse now!

OK When Tony Abbott was PM and announced he would kindly give the Australian public the courtesy of having a say on Marriage Equality with a plebiscite most of us knew it was utter bullshit and just a way to stop the momentum after the Irish & US decided that gays had the same rights as the rest of us to be legally wed.

I know most of the media ran with the line of “it is perfectly reasonable to allow the matter to be debated and then decided by the public”, even though there was no date set for a plebiscite, it was just a vague promise of some time in the future after the next election ,which we all knew would be put off for the lamest of reasons until it hopefully went away*.

The more cynical amongst us reckoned that Abbott just said that to shut up the people calling for it and of course to negate those horrible polls showing that most Australians are sweet with Marriage Equality. For people like myself, who wouldn’t have trusted Abbott as far as I could throw him, also reckoned that not only was he buying time, but was giving his uber right wing mates the opportunity to have a nasty hate campaign on the taxpayer dollar.

For mine, that was what worried me the most. LGBTI in our community already suffer so much discrimination and the Mental Health aspect of this is already well documented. To give the likes of the Conservatives a shipload of cash to actively campaign as to how the Kiddies would be damaged (looking at you ACL), God would cry, Hell basically the world would end if we had equality and Kevin Andrews marriage would no longer be important - Oh and of course we would all burn in hell with the awful Gays who are leading us into sinful  ways - was just more than I could bear. I was sure that the damage to many would be incalculable.

So we can basically ditch the plebiscite now if all the conservatives (who wanted it in the first place) are saying they'll still vote no.

Discrimination and exclusion are the key causal factors of LGBTI mental ill-health and suicidality already without the Conservative ramping up the rhetoric :(

Anyhow, Abetz & Bernardi have both basically said today that even ‘when’ / ‘if’ we have a plebiscite, they don’t give a rats arse if the Australia public says go for it, they will ignore it and vote however the hell they want. SWEET! These two geniuses have just proven that the plebiscite was always bullshit and was never about ‘caring what the public think’ nor ‘the will of the people’. Therefore, PM Turnbull, who is a supporter of Marriage Equality has no reason whatsoever to waste a squillion dollars on a plebescite?

Turnbull’s own team have blown the whole reason for the plebiscite out of the water, so there is no reason for Turnbull to carry on pretending it was valid.

We pay our MP’s and Senators a lot  of money to represent and vote for us. There are enough in Parliament who want a vote on changing the Marriage Act, it is a bipartisan vote that has been put up, so time for Turnbull to finally stand for something - Dog knows he hasn’t so far – and get Parliament to do it’s bloody job!

The plebiscite is being treated as a joke by Coalition MPs https://t.co/kLNyR06E1B

*Confirmation that plebiscite was always just a way to get Marriage Equality out of the news cycle :(