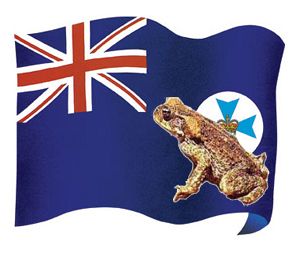 Grateful to be a Bogan Queenslander…

It’s not really NSW, it’s Sydney… Obviously with State of Origin being massive in the past few months, it has been funny reading the blogs and seeing the differences in the state now.

Obviously with State of Origin being massive in the past few months, it has been funny reading the blogs and seeing the differences in the state now.  When I was younger, the whole of the state got behind State of Origin, now you read the blogs and quite often you will see comments from ‘newcomers’ with the whole ‘Get Over It, Just a Game’ style comment.  Guess it really shows the changes in this state over the past 3 decades.

What was really obvious was the difference between the Sunshine Coast and the likes of Brisbane.  I would love to know what the demographics are for domestic migration here?  Example, I went to my Aunts 70th Birthday in Brisbane (had a great time, thanks heaps Pam!), and there was a lot of Origin talk, then again, it was nearly all family and they have all been in Queensland for generations.  Yet, on the Coast here, not much talk at all, then I looked around, most of the people we know have been here for varying lengths of time, but nearly all of them come from NSW, Victoria, England etc…

I at first thought the indifference was just not understanding and knowing the history of Origin, which makes it so parochial.  Heaps of people I know don’t really care about Rugby League but they care about Origin, as it is sort of the little picked on state finally getting a level playing field and beating the big boys at their own game (with our own players).  Many don’t realise that prior to SOO, we used to play each other, though we had our own players playing against us, as NSW considered anyone playing in the Sydney competition was THEIR player…  Though obviously you would have to have lived in Qld back in the day when we had no national team, the Sullivans was a year behind the Southern States, and you used to actually dress up to go to the airport LOL!  How is that for showing my age?

Obviously having so many ‘new’ Qld friends, I had to explain the importance of Origin a few times in recent months, and you know what…  It is not actually us vs NSW, it is more Sydney…   Even a lot of country NSW people have an ‘attitude’ about Sydney.  I can only gather it is because every head office is there, sport, business, organisations, and nearly everyone has had the experience of head office setting rules that don’t really work for everyone, just them, or of changing rules or procedures, again, to benefit the head office only, every other office can get stuffed and just trying to work around them.  Quite a few kiwis I know that come from outside Auckland have the same attitude towards Auckland (as many do towards Sydney), they are really quick to tell you that Wellington is the capital of NZ, not Auckland.  I guess we all just don’t like the arrogance of the biggest cities in our countries.

It is human nature to want to belong or feel akin to a particular group, be it your nation, state, religion, culture etc.,  A situation like State of Origin makes Queenslanders feel good as they know that they have a smaller population, less players to choose from, less money, basically less everything as the poor cousin and yet can still overcome those odds and succeed.  I know a lot of people find it over the top and don’t ‘get it’, but you know what, taking into account ‘human nature’, the fact that it is the biggest ‘drama’ we seem to have in this state, well that is a good thing.

You look around the world and see defined ‘groups’ fighting over religion and ethnic differences, and defining those differences is what makes those individuals feel they ‘belong’.  Excitement over Origin may seem pathetic to some, not worth all the media attention, or as quoted by one uncharitable blogger, “the ultimate in bogan tribalism”.  Let’s see, in this state our  biggest ‘fight’ is a Queensland vs New South Wales football game?  If that is what we use to define state pride and a sense of ‘belonging’ in this state, well happy days, I am happy to be called a ‘bogan football supporter’, beats the hell out of ethnic and racial hatred and makes this country a pretty bloody good one to live in!