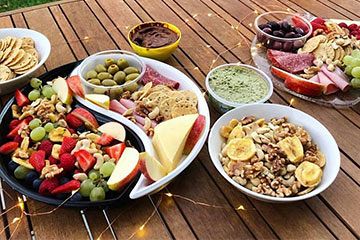 Give yourself the gift of 'doing a Morrison' for Christmas

The last 4am brain dump straight to keyboard rant for the year for me. Reflections of the year, lovely feel-good Christmas spirit type pieces seem to be the go, so I thought, hell, yeah! I can do a pontificating Christmas thing too 😉

So let’s do this… Christmas!

That time of expectations and obligations for some and depression for others. For some, it is the most frustrating time of year, for others the most joyous. Weirdly though, the consensus seems to be that we all act like some Disney movie and play happy families, even if it kills you?

For me this year, I have decided not to ‘play’.

For the first time in 2 decades we will not be hosting a cast of thousands for Christmas lunch, we – as in my husband and I – may not even bother having Christmas lunch and just snack on cheese & biscuits. As we are doing a ‘Morrison’ and pissing off out of here, ditching all our responsibilities to be selfish as hell for a change.

Now I understand that at this time of year there are expectations placed on many of you and not everyone has the luxury of squillion dollar a year job to piss of out of the country on a holiday or even a mum who lives in a small beachfront unit you can squat in, but… In all seriousness, I would like to encourage you all to find that selfish, self-absorbed, entitled Morrison within, even if it is just a touch of the Morrison vibe to reward yourself.

Here are some ‘Morrison’ Christmas activities you can partake in this year because you deserve it:

🏝️ Rushed to get gifts for everyone, even though you don’t even like half these people? Don’t. Just don’t. Buy cards, say Happy Holidays, Merry Christmas, Hanukkah Sameach!, whatever… in the card, with a bit of a personalised message. Honestly, who is going to hit you up and say “where is my present”? If they do, just smirk, smile & carry on.

🏝️ You have to host lunch, run off your feet and tired as hell, have kids old enough to wield a knife. Challenge them to organise Christmas lunch as your Christmas gift from them. Dog knows kids normally whine about most of the stuff you make anyhow coz not always massive fans of the ‘traditional’ stuff on the day coz ChRIstMaS UGH! Yes, you may end up with fairy bread, more dessert than actual nutritious food, but hey, who cares, one lousy day. Kids will probably have a great time and how could any guests whinge when the kids have tried to hard to please their parents by doing Christmas as a gift for them?

🏝️ Not hosting but have to attend a family event you absolutely hate but have to endure every single year because you are not a shit person and know they mean well, but… really just would like one year off from Uncle Arthur’s racism or your own families bullshit expectations that you won’t ever seem to live up to? Easy, do a Morrison, LIE! Normally I would not advocate lying, as, not really the way I roll, but hey, just for once reward yourself, phone the night before to at least be polite and say you are feeling a tad under the weather. If pressed, suggest it might be Gastro which will result in “well you take care…” ending the conversation pretty quickly LOL! Wake up Christmas morning, knowing you can have whole day to yourself, put your feet up, read a book, binge a TV series you have not had time for all year, play games in your PJ’s, whatever. You know you deserve it 😉

🏝️ Too late to get out of having the big bash at your joint, worked your butt off and not had time to clean the house up? Easy, shove obvious stuff in cupboards, so much smoke around for most of us, no-one will notice dust on carpets & floors. Those spiderwebs in the corners of the rooms? Who cares, if questioned, just tell the judgemental busy body you are being environmentally friendly and letting nature be the fly/mozzie killer instead of those dangerous pesticides. This will give you hours back to actually relax.

🏝️ Got a lot of Morrison types in your family? You know, entitled, have more money than everyone else around, obsessed with expensive presents etc. and you really don’t feel like wasting money on them, particularly if you live in a bushfire area? Don’t. Cancel the day. Do what feels right for you. Visit a community hub with Christmas food to share with other volunteers, donate the money you would have spent catering to your local fire brigade. Seriously, you will help others, you will feel good about yourself making a difference and if your Morrison type rellies are dirty about it because you have shamed them for being the entitled tossers they are? Stiff bikkies.

🏝️ Depending on your circumstances, there are heaps of things you can borrow from Morrison, just for one day mind you. We already have enough self-obsessed arseholes in this nation both running it and supporting said arseholes, but just a touch of ‘me first’ for a change, be it small or large could be a liberating gift to yourself 😊

Now that I have gotten started, I have way too many ideas as to how a stressful time of year could be made more enjoyable with a touch of Morrison, can’t wait to hear yours LOL!

Enjoy your break if you are having one, if you are working, may people not all be Morrisons to you, particularly those in emergency services and hospitality.