I will start with a statement:  “I despise racism, homophobia, religious intolerance, sexism, you name it...  I honestly fail to comprehend how human beings cannot be respectful of each other FULL STOP.”  I do understand that there are many reasons why people will be bigots or racists and you can’t just wish it away, all you can do is keep working with others to try to stamp it out.  Everyday people can assist in this, though good leadership is paramount.  So please read this rant in the manner it is intended.  It is about respect - or lack of it – insulting behaviour and extremely poor judgement on behalf of someone who should be displaying leadership qualities.

@davrosz You show no respect for Yolgnu, verballing them & using them for ur political points. Put ur hood back on & go away @samanthamaiden

Now, I know that David Donovan (Journalist and Managing Editor of Independent Australia) can be acerbic at times, is not exactly well loved by a lot of Journalists and to be frank, when he gets a sniff of an issue can be like a dog with a bone, so my immediate reaction was “OHNO! What did you say David to get that awful response?”.  Looking back in the timeline, he said nothing to deserve the above tweet.   There are two very serious issues here that make this tweet so wrong.

To be quite frank, “Put ur hood back on” in this context can only be construed in one way and for a man in Mr Mundine’s position to say something so racist is beyond expectation and not befitting of the man who is now the chairman of Mr Abbott's advisory council on indigenous affairs.   For any caucasian who is NOT racist, who does care about racism and in the case of David, even has a category of news on his site called “Indigenous Australia” (something a lot of mainstream news sites don’t bother having) to be referred to in the insulting manner of a Ku Klux Klan (KKK) reference is beyond the pale.

The second insult here is the “You show no respect for Yolgnu, verballing them & using them for ur political points” comment.  This I would assume from previous tweets is in relation to this piece "Abbott’s broken Indigenous promise and the Credlin omission" about Tony Abbott breaking a promise that he would spend his first week as PM on Yolngu land.  It was an interesting piece, including video of Mr Abbott stating “And why not, if you will permit me; why shouldn’t I, if you will permit me; spend my first week as prime minister, should that happen, on this, on your, country.”

Yes, as far as I can ascertain David is not a fan of many of PM Abbott’s plans for this nation, though as an Editor, not a hope in hell would he ever publish an article or comment that ‘verballed’ anyone.  To think he would ‘use’ an Indigenous leader, or as David himself refers most respectfully to our Indigenous Australians, “Australia's First People”,  particularly not!

In 140 very short characters Mr Mundine has insulted David Donovan personally, racially and professionally!  If it wasn’t so offensive you would be impressed one person could put so much bang for their buck into one tweet?

Now, I was going to leave this alone, in fact I was hoping that Mr Mundine may have reconsidered his appalling insult and either retracted it or made an apology to David this morning.  This has not happened and we are now left with many questions in regard to the fitness of Mr Mundine to actually hold such an important & influential office in this nation? 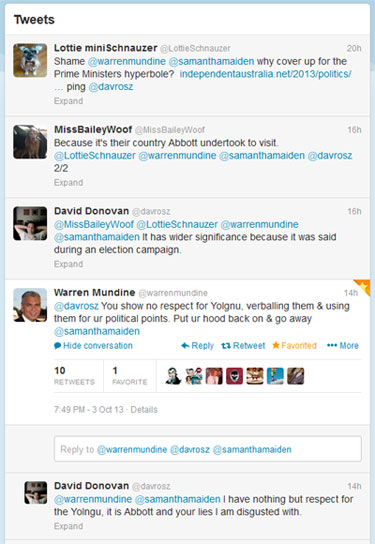 Mr Mundine may not like what has been written about him in Independent Australia?  I know since his appointment Mr Mundine has also copped a lot of flack from Indigenous advocates and as stated at the beginning of this rant, I will not go there as I am just not qualified to.  What I do know is that so many mistakes and oversights have happened in the past (and sadly will probably happen in the future) in regard to dealing with the myriad of issues that face our indigenous community.  Heading the advisory council on indigenous affairs is going to be a massive job, and requires a particular type of person of integrity to ensure that mistakes of the past are not repeated.

I have to wonder if Mr Mundine is ‘that’ person to fill that leadership role?

There is no way a statement like Warren Mundine’s tweet could in any way be misconstrued and if this is his behaviour in the face of comment that he dislikes or disagrees with, then I for one am not hopeful that he is the man do this job.  Such short-sightedness and disrespect to another human being is not the sort of traits we want in our leaders.  Regardless of the misgivings many may have on the appointment of Mr Mundine, I naively hope that he will prove his detractors wrong and not be just another political PR appointment.  He could make a small start in displaying his integrity by apologising for his misguided racial & professional insult to David Donovan?

Once you become appointed in such an important position to a terribly complicated & intricate political and humanly sensitive area, as Mr Mundine has, you become a role model, a leader, and a certain amount of tact, nuance, intelligence, statesmanship and let’s be honest, just common bloody decency should be displayed in all public facets of your life – and Mr Mundine, Twitter is public.

Let's hope for better, too many of my friends have been let down in the past by leaders more interested in politics and their own egos instead of doing the important job they have been tasked with.  Let's hope you are not one of those Mr Mundine...

PS: Please be aware that David was not aware of me writing this piece - he certainly does not require me to be a cheerleader for him - it was not written specifically to personally defend him, (though I do enjoy his work), more his position and I would have been just as concerned and upset about any journalist that I respected being maligned so publicly by one of our national leaders.

Update 4.26pm: I have not had time nor the ability to go through a full tweet search, but some things I have seen so far in relation to and AT Mr Mundine are not acceptable and some of the language used is as bad & in some cases worse than the offensive statement above..  Because he is being abused on Twitter does not negate what Mr Mundane said in his tweet that I an taking issue with, BUT it is not acceptable in any way shape or form to abuse someone, particularly racially with the likes of "Uncle Tom" name calling :(
Two Wrongs Do NOT Make a Right.
Noely
-------------------------------------------