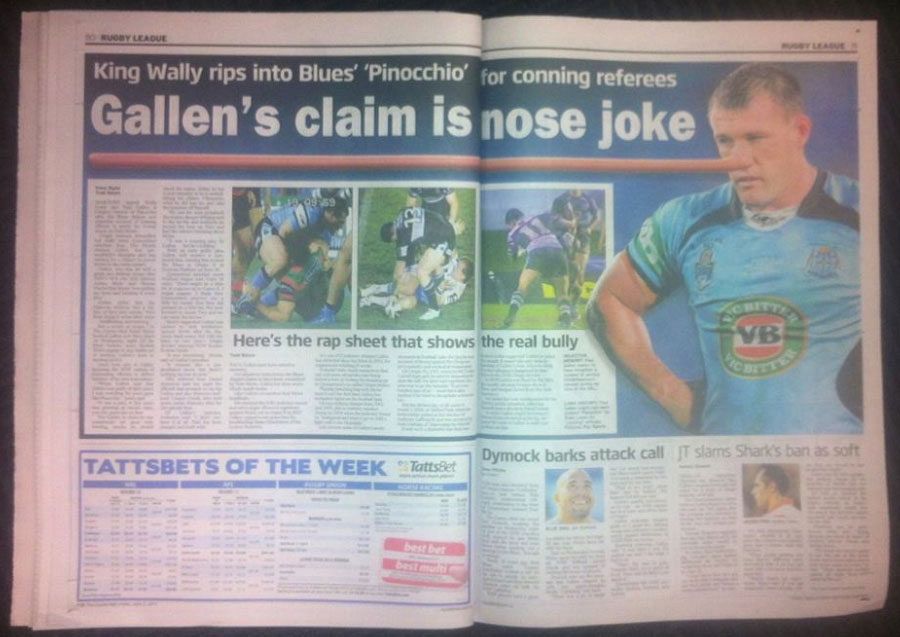 Yes, I am a Queenslander so before anyone can call me a hypocrite, yes, I was filthy with Paul Gallen’s punching form on Wednesday night. Like many Queenslanders I screamed at the TV as well, calling him a grub (and more...), BUT, unlike many Queenslanders I don’t think it would have changed the result of the game if Gallen had been sin-binned for 10mins. NSW were on a roll and I think Gallen being binned would have kept them fired up.

Yes, I am a Queenslander so before anyone can call me a hypocrite, yes, I was filthy with Paul Gallen’s punching form on Wednesday night.  Like many Queenslanders I screamed at the TV as well, calling him a grub (and more...), BUT, unlike many Queenslanders I don’t think it would have changed the result of the game if Gallen had been sin-binned for 10mins.  NSW were on a roll and I think Gallen being binned would have kept them fired up.

I agree with Wally, “Referee Ashley Klein not up to State of Origin standard, says Wally Lewis”, sort of, he is right the Referees were not up to standard - COMMUNITY Standards.

Yes, Origin is passionate, yes, I will not pretend to be politically correct and decry the violence, I can’t, it is a full on game, Richard Hinds probably explains it pretty well, the attraction of violence in Origin, with the punches AND this is in the Sydney Morning Herald?  "The intoxicating thuggery of Origin".  I know many think that Rugby League is too violent and obviously with Origin being the pinnacle of the game, it is going to be even more intense, so fights are going to break out.  Sport is passionate, to pretend it isn’t is ludicrous.  Hell, even in High School netball finals I would find myself fantasising about smacking down that bloody Goal Keeper who zoned me one time too many or kept ‘accidently’ (BS it was an accident) falling back on me & knocking me out of court while going for a rebound (obviously I still harbour issues LOL!).  So if you can’t get how passions can rise too far, then you probably have never played competitive sport to any sort of higher level.

My issue with Gall’s punching form is the fact there were no ramifications, this is where the Referree’s really dropped the ball.  To lose your nut in the heat of the moment and toss some punches, MYEH that happens in Origin, BUT, even back in the heyday of Origin thuggery, the 80’s, you would have been binned for it!  To add insult to injury, this man who is the Captain of his team, so held in even higher esteem, not only walked away from the Referee whilst he was being reprimanded (which in my humble opinion he should have been pinged for as well), he then turns around in the media carrying on about how it is just Origin, sounding like a little kid giving BS excuses about how Myles deserved to be punched in the face a number of times???  Seriously?  Imagine your kid or a workmate losing their nut, punching someone in the face & giving that sort of BS excuse and then just getting off scot free?

I know Rugby League purists (and Blues fans) will say he has copped a week suspension, BUT that is not good enough.  In this day and age where we say that violence should not be tolerated, the fact that Paul Gallen could punch someone a couple of times and the kids at home see absolutely no ramifications for this action is just reprehensible.  It makes a mockery of the whole “One Punch Can Kill” campaign, which I think any responsible person would agree with.  The demographic target of the this campaign is pretty much the same demographic watching the likes of State of Origin!

The NRL could have shown some maturity in this situation.  Come out and publicly said that the Referee’s got it wrong.  They could have given a public undertaking that in future that behaviour will result in an automatic Sin Binning.  They could have taken Paul Gallen aside and told him to pull his bloody head in and at least show some remorse for resorting to punches as a relief for frustration.  The NRL has done none of these things.  All they have done is rev up some more PR for Channel 9 so that everyone is tuning in to the 2nd game, which they would have anyhow.

The NRL may have a new regime and a new boss, but they are still the pathetic, behind the times hierarchy that will be even more bewildered in future seasons as junior numbers decrease, not being able to work out why???  Mum’s all over the country already worry that Rugby League may be too dangerous for their precious little boys to play.  They also worry about the reputation with League due to the many scandals.

Dave Smith, do you really think showing Australian mum’s it is ok for a leader in the game to throw a punch and there will be no ramifications is a good look?  It isn’t!

Rugby League is a rough game.  There will be more punches thrown in Origin.  But FFS! NRL show some responsibility and ensure that a punch will always be binned at the very least!  It won’t make the punch any better, but it at least shows the community that you don’t condone it, and that there is immediate punishment for it!

PS. Yes I have included the NRL handle on purpose as I am hoping that this will be re-tweeted many times and that the NRL might get the message.