Eleventy-nomics, Brough, Ashbygate Trifecta - Proof MSM should not always be a dirty word 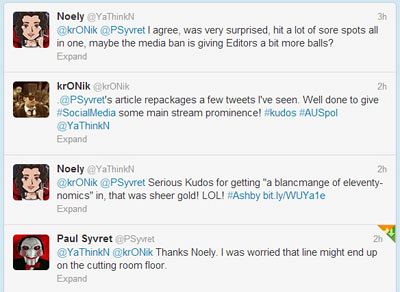 Woke up to one of those days when nothing goes right from the start which never bodes well for a productive work day.  Until that is, I started my morning coffee & trolling of the newspapers... First cab off the rank was the Courier Mail, I am in Queensland obviously, and to my amazement and pleasure, which at 6am in the morning is normally hard to find, this gem was on the front page of the CM site “Timid Tony Abbott tenders tiny target”, calling Bullshit on Mr Abbot’s new media strategy which treats us punters as morons was enjoyable enough, reading further though was pure gold!

Regulars on Twitter who are critics of particular LNP statements & policies would have been so proud to see the catchcry of “blancmange of eleventy-nomics” get a mention, reading on, we then get a dig at not being overheard “discussing the finer points of Mal Brough's campaign” and to round out the Trifecta of goodness that was this brilliant article of Paul Syvret's was the mythical “Ashbygate” reference.  I say mythical as many of us have been pushing for the media to look into Mal Brough’s connection to this whole sordid affair, yet it has not made a blip on the media radar.  Seemingly, over a 100 mentions of Mr Brough in the Rares judgement is not considered newsworthy?

Now, I know a lot of Journalists get peeved at the criticism they receive on Twitter from fans of both political teams, Blaring The Megaphones on Ausvotes 2013, took a pretty big swipe at the repetitive mantra’s of many users of Twitter and the abuse of Journalists (and the author himself copped a lot of flack).  Some of that article I agree with, though some aspects I am not so sure of. I wonder if maybe the general public were not so disenfranchised by a media that is more concerned with a 'Narrative' (quickly becoming a dirty word online as 'Losing the narrative' demonstrates) instead of informing us of ‘all’ the news, punters would not be so frustrated, hence reducing to ‘yelling’, when particular issues like Ashby are ignored?  I can never excuse the over-the-top partisan ranters, they will won't disappear and I suppose if you sit in any pub in the country, you will see this segment of society happily at play.

Many journalists & professional writers themselves could help in this Main Stream Media (MSM) vs Online Media (New) argy bargy relationship.  Like any industry, I think there are some real slackers out there, the ambitious press gallery journo patently angling for a job with the new incoming Government, the new celebrity journo’s who would never deign to come down from their lofty height to address a question from the great unwashed and let’s not to forget the serious fruit-cakes masquerading as journalists.  There are also some out there who are interacting on Twitter, sharing their knowledge, engaging with us punters, heeding our concerns and treating us as a serious segment of the public.

A lot of these Journo’s are just the same as the rest of us in relation to factors affecting their jobs.  Many are not their own men/women when it comes to what we see in print, they have editors, sub-editors, legals and their own corporation's hoops to jump through and this should often be considered when we read the finished product.  Those of us who are actively involved in political discussion online despise being dismissed out of hand and lumped in the same boat of what the lofty commentariat purists call Social Media ‘Online Nutters’. A little respect for both perspectives could go a long way and really improve the political conversation both On & Off Line.

We may not always like what a Journalist writes, in fact I often don’t agree with what Mr Syvret opines in his columns, but hell, when you see an article like this today, I am one grateful punter applauding.  It clearly illustrates that it is patently wrong to label all Journalists with the derisive MSM label.

Then again, I am just a 'customer' what the hell would I know :)
Cheers
Noely  @YaThinkN