Due to the previous Governments mismanagement we have no choice but to... 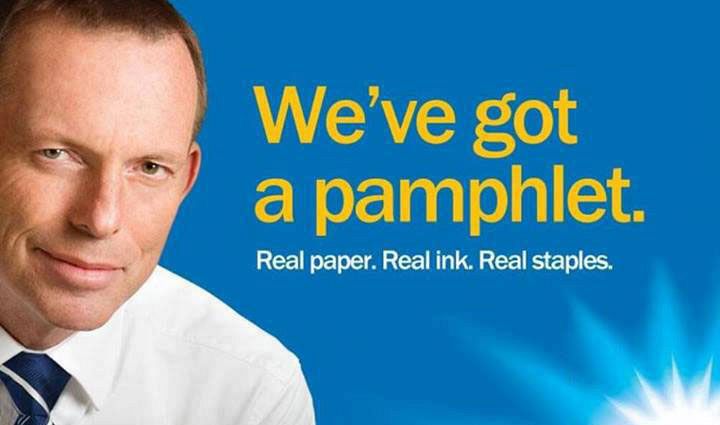 Only a few days into the election campaign and a lot of what Mr Abbott has been saying is sounding eerily similar to what Mr Newman said before the last Queensland State election.  Setting up the stage for how bad the economy is, how we are in dire straits, pretty much “be afraid, be very afraid”.

I will be explaining a bit about Queensland here, but stay with me, it is important for Australians to know what the apprentice has done...

Now I will give Mr Newman the fact that yes the ALP in Queensland were on the nose, too many arrogant decisions without consultation – Traveston Dam, Council Amalgamations, Asset Sales, Water etc., - and a lot of these decisions were obviously  made due to Financial pressure that resulted from a  combination of multiple Natural Disasters, the GFC and yes, even though ALP people don’t like to hear it, stuff ups like the Health Payroll system... (Interesting how the commissioner seemed to point finger at Mr Grierson and Mr Reid yet the Qld LNP, in the only press release yesterday, found the Unions to blame? - only in Queensland SIGH!) 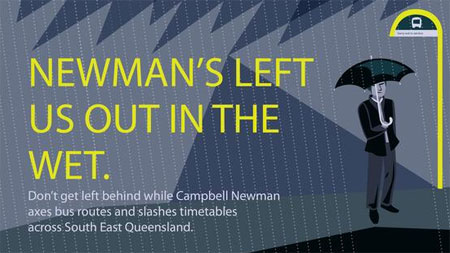 Since the Newman LNP Government came into power they have been like kids in a candy store.  I am sure that other LNP Governments around the country are studying them as to how to implement “Liberal Ideology 101”.  We have had white-papers, enquiries, commissions, you name it, basically the hit list of everything that has annoyed the conservatives in the last decade or so has had some imminent LNP mate put into control over it (some haven’t, but not many) to have a talkfest or write-fest on what went wrong so they can say how bad the previous ALP Government is...

As the State of Queensland is supposedly more broke than Spain & heading towards Greece status as per Mr Costello’s so-called ‘Independent’ audit (we won’t even start on the companies Mr Costello represents that gain from privatisation & asset sales), millions have been spent on these papers that basically give the LNP carte blanche to do what Libs do best, cut health & education, sack people, sell off or privatise or outsource (whichever word is the flavour this week) essential services, always with that pretty piece of paper in hand (like Mr Abbott’s blue pamphlet) as justification.  This results in a downcast sad looking Mr Newman saying”

“Unfortunately due to the fact that the ALP (or Unions, the LNP like to mix up the blame too) left things in such a bad state and the ‘independent’ panel/commission/auditor (again whichever flavour currently being used to mix it up a bit) recommended this course of action so we have no choice.”

That last paragraph is very, very important in regard to this upcoming election.  How many white papers, commissions or the like have been suggested so far by the Liberal National Coalition?  Mr Hockey has already basically said they don’t trust Treasury, so I gather Costello will get another gig there, Mathias Cormann has already stated on numerous occasions that they will be having a ‘look’ at the tax system, GST of course has to be included in that ‘look’ as obviously to have a thorough review of the tax system this is an integral part of it.  Now, if Treasury is not the one doing this ‘Tax Review’, which LNP mates will be?  I can almost see Mr Abbott now with the same Newman ‘concerned’ look, telling the public...

“It is unfortunate that we have to raise GST but the ALP Government left us no choice, they left the books in such a bad state – insert monologue of economic disaster – that we have to make these hard choices and of course we are taking the advice of ‘experts’ and these experts have recommended this course of action so we have no choice”.

I have a terrible sneaking suspicion that this will also happen with the NBN.  Obviously they will honour work already started on contracts already signed, but, we will then hear the sob story about how there is no money, we have to get out of deficit, so we are putting off the NBN, (Fraudband version) for 3 years until we are back in surplus.   Then, the next step will be a backflip on that as the Developers Council, Business Council, Real Estate etc., will jump up & down due to the vast disparity in house prices due to NBN in certain suburbs & not others...  Of course, the LNP Govt will then do another white-paper and – drum roll please – go to the free market!

Of course, who is going to put their hand up to help with putting those dodgy boxes in, as obviously NBN Co will not exist anymore?  I would have a lazy $10 bucks on Foxtel getting it?  Now this will not sort out our copper situation, but hey, who cares, Foxtel will toss a satellite on the roof for you if you need it, in a nice broadband/mobile/ TV bundle of course?  But don’t worry, that connection will still not be good enough for us to subscribe to the likes of NetFlix, we don’t want to give the punters any other choice besides Free to Air TV & Foxtel...

I could be wrong, I could be suspicious, or I could be punch-drunk from the last few years of being in a State with an over-excited LNP leadership, but every Qld LNP privatisation/Outsourcing/Sale seems to have gone to a business that already had links to the LNP & who has bigger link to Mr Abbott than Mr Murdoch?  As we have found in Queensland, big business LNP donors seem to be getting some pretty cushy deals with the Qld LNP Government, again, I could be wrong, but is looking that way out in punterland?

I could give many examples of the similar language I am hearing, but there are too many...  If you have the time, have a cruise through the 'Queensland State Government statements' as every  ‘broken promise’ or just plain ‘bad stuff’ is the fault of...
A. Previous ALP Government,
B. Anna Bligh,
C. Julia Gillard,
D. UNIONS (they are seriously evil)
and finally E. Kevin Rudd...
The Opposition, not giving us any figures, not trusting Treasury, ‘wait & see what the real fiscal outlook is’ crap is the same stuff we heard from Newman.
Think about that, think about it very hard...

I may not be the best at maths, BUT, Mr Abbott is promising to repeal or look at repealing a heap of Government decisions or taxes, BUT, has not told us what is going to up in taxes, BUT, still going to put us into surplus because the Coalition are always better Economic Managers, it is in their DNA.
No cuts, no extra taxes, but will get in surplus?  So how does that add up?

The only conclusion I can come to is that an Abbott Government will follow the Newman Government blueprint of sacking all experienced (insert expensive) public servants – teachers, nurses, fireman, police, health workers and more...- to replace with cheap graduates.  Coalition NOTE you must always use the terminology of “Public Servants” as that gives punters the feeling that lazy bureaucratic time wasters are being sacked, NOT ‘essential services’ staff as the public cop that better.  Then when you find that you actually do need some of those people down the track, you give the contract to a Recruitment company, or stuff it, let’s just outsource the whole bloody nursing home or hospital to one of those wonderful ‘Health Services’ companies who have been so supportive of us.  Of course, sometimes that is too complicated, so let’s just totally sell that Service, as the free market always performs better?  We won’t worry about the fact that every time the State loses total control of piddly items such as Electricity or Water that it ends up costing us a bloody fortune (minor technicality for future Governments to worry about).

Again...  I could give many examples, but suggest you just follow #Qldpol or Queensland news, as the rhetoric coming out of the Coalition election campaign is sounding eerily similar.

Noely
PS: Obviously if you are rather affluent, a woman of calibre or own a large business, you will be sweet.  However if you are an average punter or minority, sorry, you have been warned...