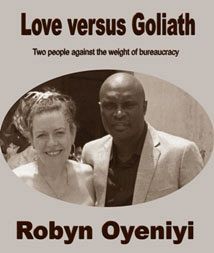 Don't know an Asylum Seeker? Robyn Oyeniyi does, in fact, shock horror, she fell in love and married one. Do yourself a favour, purchase Love versus Goliath, be inspired, educated and understand.

Don't know an Asylum Seeker? Robyn Oyeniyi does, in fact, shock horror, she fell in love and married one.  Do yourself a favour, purchase Love versus Goliath, be inspired, educated and understand.

Robyn is a lovely lady and you can purchase her book through a variety of options by visiting "Team Oyeniyi", Robyn can also be found on Twitter @TeamOyeniyi for more information.  More about this true story below...

Nearly forced to flee her homeland to be with the man she loves, Robyn Oyeniyi battled her government and won after committing the cardinal sin: falling in love with and marrying an asylum seeker. Love versus Goliath chronicles the pain, anguish, and trauma government interference caused in the lives of Robyn and her family.

When she was 15, Robyn’s parents committed suicide six months apart. Their deaths, and the ensuing government oversights, left her afraid that bureaucracy would always let her down.

Forty years later, Robyn met John, an asylum seeker from Nigeria who was then being held in mandatory detention in Australia. He had fled his homeland after being beaten almost to death – and almost shot – during a period of political turmoil. John fled Nigeria and travelled through Tanzania, Zimbabwe, India, Bangladesh and China before reaching Australia in 2008. He was initially housed with a murderer while  waiting a decision on his claim for a Protection Visa, a situation that filled John with fear.

John was involuntarily removed from Australia in April 2010. For the next fourteen months Robyn fought desperately to reunite the family.