Do we really care about 'Our Selection'? 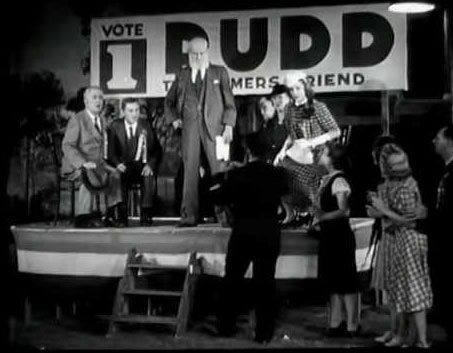 Voting, Compulsory vs Voluntary – has gone off...  Wayne Swan had a spray at the Sunshine Coast Uni and this morning Barnaby Joyce has been out there warning us all that “Scrapping compulsory voting would be a boost for extremists” (could those ‘extremists’ he is referring to be Bob Katter & Clive Palmer?).   Personally I am 50/50 on it.  On one hand I think that if you don’t give a damn about how our country is run, then you shouldn’t be given the opportunity to make an ill-informed vote, then on the other hand, I shudder at the thought of a celebrity or the like having enough money & star power to pull in the punters and gain high office or as in the case of the US elections where rich old white man make it hard for poorer plebs (in our case bogan Oztrayla) to vote.

Maybe if we were all properly educated at school as to how our Government works, how our voting system works, Senate etc., we would maybe not need compulsory voting, as voters would be more educated and maybe care more about our Government processes .  I mean, it is a legal obligation to vote, it should therefore be a legal obligation for the Government to educate us on what we are voting for?  You never know, if we were all more educated about Government there might be less Solicitors as MP’s and our Reps might actually be ‘representative’ of the electorate?

What is sad, is that once you get past rigid Holden vs Ford advocates and the professional political commentators, most people I know, really don’t care.  They don’t really like any of the pollies that put their hand up for the job and are terribly disparaging about all the political parties.  What experts call ‘disengaged’ and from my experience, they are slowly becoming the majority.   I was fortunate enough to grow up with grandparents who were staunch life-long Labor members and interested enough in me, to teach me ‘stuff’.  As a little kid I would be allowed to stay up late in the rumpus room to watch the elections with him.  I distinctly remember thinking in one state election that Joh was out, because the red line on the screen was so much higher than the green one.  Imagine my dismay when granddad told me that was not the case as the blue line was added to the green line and together they beat the red line.  I was pretty dirty about that, it seemed wrong that green & blue could gang up on the red, it was ‘unfair’!  Probably why as a young voter I was drawn to the democratics and their wonderful "Keep the Bastards Honest" mantra (I have still never forgiven Meg Lees).

Obviously I know a little bit more than the colours of voting now, though to a certain degree I still think our political system is unfair.  It is not like the ‘Aussie battler’ ideal of the old Dad and Dave: On Our Selection where you can crack the poo with corruption in your backyard and the crappy life that is caused by it and decide to run for State Parliament to change it.  Though I wish you could.  It seems that politics has become such an industry in itself, more concerned about their pre-selection systems, sound-bites, wealth, media spin & skewed polling etc., many have forgotten why they have the job in the first place.  To actually ‘represent’ their electorate.

I have used this Hypothetical in the past and it worked well to explain why I hate the full on partisan politics of political parties.   I am using Labor in my example here, but all the major parties are basically the same...

Let's say the Labor Party policies seem ok to you, and your local Labor Candidate seems like a good bloke, so you vote him in.  Later down the track, Labor decide, Right, we are tidying up the beaches of Australia.  We will be putting into law that you need to get a licence to use the beach... (Yes, I know ludicrous, but stay with me here).  Now, obviously being a beach loving area here on the Sunshine Coast, we would scream blue murder and expect our Labor Guy that we voted in to do everything in his power to stop this stupid law, which the vast 'Majority' of the electorate here hates.  Guess what, even though his first responsibility should be to represent the wishes of his electorate, he won't!  He will apologise, tell you it was out of his hands, stress how he tried, blah blah, but the fact is, he will always vote in Parliament as per what the "Party" wants, not his Electorate.

So even though in a democracy, the Elected Representative is supposed to be responsible to his/her electorate first & foremost, if they belong to a Political Party, they are not, and in most cases, Political Parties will not allow a conscience vote, nor will they allow any sort of dissension as they think it will dilute the 'message' or 'brand'. Sort of fraudulent if you think about it?  Maybe the discussion should be more about making our politicians more accountable to us, the electorate, than how we vote?  I mean, if they actually did represent us, regardless of their political flavour, then we would be more likely to get off our butts and vote for them?

Anyhow, back to this Compulsory vs Voluntary business, personally, I feel it is a smokescreen and hope that people a lot smarter than me can dissect the whole “Electoral Reform Discussion Paper” and find the Easter Eggs in it.  Of course if you are a Queenslander I would be remiss not to advise you to actually have your say as Mr Newman wishes, visit: “Have your say on Queensland's electoral laws”.  You never now, with enough input we might get a fairer system, then again, pigs might fly, but you never know...