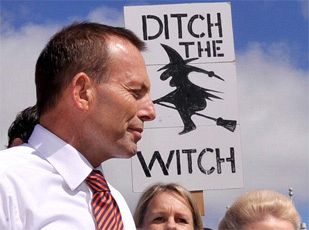 I would seriously suggest that before you - the media* - go lecturing us punters about outrage in regard to sexism that you take a good hard look at yourselves, your past inaction invalidates you and does NOT give you the right to lecture us!

Unless you have been living under a rock, you would be well aware of Clive’s stupid and sexist comments about Peta Credlin. I say ‘living under a rock’ as the media are ‘outraged’. Clive made his comments on Monday night, Journo’s were ‘shocked’, tweeting how ‘Nasty’ he was.

By Tuesday Morning James Massola was admirably quick out of the gate with “Grow up: Clive Palmer's comments about Peta Credlin have embarrassed only himself” and the outrage had seriously begun. By Tuesday afternoon we had David Speers focussing almost exclusively on the sexism, not only outraged by Clive but outraged that members of the ‘Left’ - wondering who they are, Yellow Pages don’t have a head office listed for that entity - and the ALP have not exactly been overwhelming in their condemnation of Clive Palmer, nor yelling very loudly for his apology to Peta Credlin.

Yessiree the media have ‘finally’ seen the light, they know sexism when they see it and with fire in their belly will call it out and name it!

Now, Wednesday morning we find it is not just the ‘left’ that are silent on Clive, Ms Miranda Devine is seriously disappointed with the ‘Feminists’ too, (another where I could not find their head office listed, damn) and with the same fire in her belly gives them a flogging in “Feminists let Clive strip them of their integrity”. Obviously Ms Devine didn't notice the graphic above floating around Social Media? Of course it goes without saying that Mia Freedman, the doyen of women’s issues, is disappointed too, thankfully she has her own Jamila Rizvi to set things right in Mia’s world (sorry, no link to that one, is a principal of mine).

Again Mia is blaming the ‘Left’. I could carry on with examples, but I won’t, every single news show from Sunrise to ABC Breakfast News are up in arms, fighting the good fight against sexism and Clive, it is a thing of beauty and wonder to see. It is also the height of hypocrisy.

Not many are condoning Clive’s comments. In fact, many I speak to are cranky that Clive screwed up a perfect opportunity to display exactly how unfair the PPL of Calibre actually is.  At the moment, more than a few punters are seeing Clive as the only thing that can help us in regard to the terribly inequitable coalition budget being inflicted upon us. Instead, the drip misses the mark politically and to add insult to injury, displays his ridiculous sexism in the process.

Australia in recent years has probably seen the ultimate in just how nasty sexism can be.  Julia Gillard herself experienced everything from subtle and snide sexism to full on misogyny. Our esteemed media response was *crickets*. Not only Ms Gillard, Penny Wong and others also experienced some serious nastiness, again, media informed the public that it was “Politics”, “Taken out of Context”, my personal favourites the very serious discussion on what exactly is ‘Misogyny’ and of course we can’t forget that we dumb punters just never understand the ‘context’ of a situation.

So, Coalition women are lecturing Palmer about saying hurtful things about a female. You couldn't make this shit up. pic.twitter.com/j5W7daMKGr

Many women, many men and awful  lot of younger people were seriously enraged, yes there was outrage, the intensity came from the fact that the ‘media’ did not highlight, they did not call for anyone to apologise, in fact, they explained it all away to us and made out like any of us who were outraged were hysterical?

Mia, Miranda and every other snooty Journo commenting how the mythical ‘Left’ & ‘Feminists’ are not outraged, you know why we are all not yelling?  WE DON’T NEED TO!  You in the media have FINALLY noticed political sexism and called it out.  Shame it is so bloody late, but hey, better late than never.

I would naively like to think that this sudden change of heart in not accepting sexism in our politicians is the media have reflected and learned their lesson and this is the standard of reporting we can expect in the future. Sadly, after watching in recent years, I am more inclined to think that the outrage is more that someone from ‘their team’ has experienced it, so it is ‘different’, not to mention they all tend to loathe Clive so it is a bonus that they can actually whack him with something of substance. At my most cynical I also wonder if it is currying favour with Ms Credlin herself, as it is patently clear she is the gate keeper for PM Abbott and hence the Government so backing the injustice against her is a pretty good career move too?  Yes, I know, I will probably go to hell for suggesting that.

Let’s hope that my cynical thoughts are way off base and the Australian media have actually seen the light in regard to Sexism.

I would seriously suggest that before you - the media* - go lecturing us punters about outrage in regard to sexism that you take a good hard look at yourselves, your past inaction invalidates you and does NOT give you the right to lecture us!

Cheers,
Noely
*Note not all media ignored the sexism in politics in recent years, there was the odd shining light. In fact the best piece I read was in Fairfax, the same paper that was first off the blocks in this instance, note, it was not a political reporter, but their ‘sports’ reporter :( Though when I can find that original link I will toss it up here, was a very good piece...