Clive Palmer media hysteria is an insult to voters in Fairfax 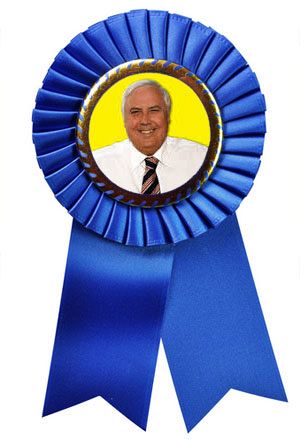 I am getting really fed up with reading all the ridiculous hyperbole in regard to Clive Palmer, finally, being named as MP for Fairfax.  This is my backyard and I have had enough.  I am not personally a fan of Clive’s, I think he is a cunning bugger & I have no idea what his ‘real’ end game is, so that makes me uncomfortable, but I am a fan of democracy!

This ridiculous situation is giving me flashbacks to Ms Gillard’s Misogyny speech, that resonated with many,  Media ignored it of course, then had to justify to themselves – after International media attention - rather defensively with BS ‘context’ crap to basically excuse the fact that they pretty much collectively missed an ‘important moment’ in this nations political history.  Similar seems to be happening now.  The media has collectively giggled about Clive for PM (which is funny & pure ‘Clive’) ever since he announced he was running for Parliament.  In fact back on the 26th of April I issued a warning on this blog “Laughing at Clive Palmer? Let’s see who is laughing in a few months...”.  The ‘potential dangers’ of Clive Palmer hysteria now really stink of sour grapes that, again, media were caught on the hop.

Yes, Clive got in due to him having awesome funds to play with, but NOT in the way media seem to think.  Fairfax is a Blue Ribbon LNP seat, in fact, all 3 Sunshine Coast Electorates, Fisher, Fairfax & Wide Bay are, full of generational conservative LNP voters with a smattering of ‘no bloody idea, who cares’ voters.  The LNP are the only game in town.  The Chambers of Commerce are riddled with LNP, the lone Daily Paper is extremely pro-LNP, the highest rating local 7 news is anchored by Mal Brough’s brother Rob Brough for god’s sake, not that I think Rob would actually show any partisanship as he seems an OK bloke, but as Rob is such an institution here on the Sunshine Coast that flows on to help his brother inadvertently, when in fact, Mal is a blow-in.  Pretty much, if you are not aligned with the LNP, you won’t get anywhere in this area.

This is where Clive’s money helped.  Clive’s money meant he could afford advertising from Coolum to Maroochydore, Buderim to Eumundi & Nambour, the disinterested actually knew who he was.  Clive’s potential advertising dollar in media also meant the local paper & TV stations could not ignore him.  I  could pretty much gaurantee that the local paper gave him just as much coverage as the LNP candidates (amazing in this area) so as not to jeopardise ongoing resort advertising revenue & didn’t mind as they didn’t think he would get in anyhow.

I will reiterate, this is a conservative area, wall to wall LNP at every level.  If this super safe Liberal seat had been toppled by anyone else other than Clive that would have been big News! (ala seat of Indi)

When the ALP are in power they don’t bother spending any money here as it is obviously a waste as they won’t get votes anyhow.  The LNP also don’t bother spending any money here as they know they don’t have to as they will get the votes anyway.  Pretty much a Lose/Lose situation for locals, don’t even ask me to go into the dynamics of that SIGH!  Difference at the moment is the economy here, as it is getting worse, people actually started thinking a bit more about their vote. We have high unemployment, Tourism has sucked for over 3 years now (weather & high dollar), and ever increasing numbers of FIFO families.

Clive may have had life membership of the LNP at the time of his bust up with them, BUT, Clive is an old fashioned NATIONAL (and believe you me the united front of the LNP show in Queensland is not all it seems), he learned his politics at the knee of the sainted (as far as Qld Conservatives are concerned), Johannes "Joh" Bjelke-Petersen.  This meant that not only did the locals ‘notice’ Clive as a candidate due to his media profile & advertising spend, he was a ‘real’ conservative ‘alternative’, a comfortable choice for many die-hard conservatives, sick of being ignored.

Clive also heavily promoted getting the airport upgraded & flights north.  For a large FIFO population cutting out the regular BrisVegas trip gives hours back to family life.  Media also like to flog that Palmer Coolum Resort is losing money left right & centre, yeah, look back a bit further, it was also doing that as a Hyatt too!  Clive may be populating it with his dodgy dinosaurs, but he is also trying to attract Chinese tourists & other events, which means more employment & flow on effect to local business.  At bare minimum, it gives hope that times will get better in this region.

Every single person I know who voted for Clive, knew exactly why they were voting for him.  I may not agree with them, BUT their reasons were valid.  They did NOT vote for him for ‘entertainment’ value, they are NOT surprised he got in, to continuously carry-on with that line is offensive.

Yes, Mr Palmer may have some conflicts of interests.  He is NOT the buffoon he portrays, he is a smart man, (while you are giggling about his Titanic, maybe have a look at where it is being built & who is building it, where they are getting the raw resources from, then put 2 + 2 together), he knows he will have to list all his interests. It has also been suggested by a few that know him that he considered politics, not only because he was pissed at the LNP (as the Courier Mail likes to flog), but because he is semi-retiring to stop travelling overseas so much and “spend more time with his family”.  Media making jokes about “ummm does Clive realise he will have to spend time in Parliament” have obviously never actually looked at his overseas business schedule.  Bothering to rock up to the Parliament with the piddly amount of time it sits will be a walk in the park compared to what he has been doing.

So let’s just have a glance at current Conflict of Interest, Business Influence & 3rd party manipulation in our Federal Government:

I could carry on listing examples, Hell, the Catholic Church’s influence on the PM & front bench alone could take up pages.  For all I know Clive MAY try to abuse his position as MP, but he is only one vote, AND we are ‘aware’ of his influences & interests.

What I do know is, that Clive only needs to do ONE thing to improve the electorate of Fairfax and that will be a hell of a lot more than what any other conservative has done in the past few decades.

So media, stop insulting the people of Fairfax just because it suits your particular narrative now.  Many non conservatives also like Clive, they like him holding Campbell Newman’s Qld LNP “dictatorship” to account, they liked his “Christmas Lunch for the needy”, they liked his support of “Qld Public Servants who got sacked”.  The Conservative liked his Joh era background & conservatism, for some self-funded retirees his mega-bucks equal good financial managers in their circles.

So let's put this in perspective... When it comes to "influence", it may not fit with the current media narrative, but 'unlike' Gina Rinehart (inherited wealth & cosying up to politicians) and Rupert Murdoch (inherited wealth & media manipulation), at least Clive Palmer (built wealth from scratch) put himself forward to Parliament and is playing by the rules of Government by giving people a CHOICE of him having influence by being 'voted' in to represent the people of Fairfax. (even if he is annoying to you in the media)

Maybe because I am from Queensland where we are used to maverick politicans we see 'representation' differently.  The people of Fairfax MAY have made a mistake, (sure as hell did in Qld State Election)?  Clive could turn out to be the biggest pain in the khyber to all & totally useless?  But they knowingly made that choice and if Clive is a mistake, it is 'their' mistake and it will be up to them to toss him out at the next election should they choose to do so.  Pretty much the same as every other electorate in the nation, it is called ‘DEMOCRACY’, you might want to to look it up.

Cheers,
Noely
Then again, what the hell would I know, I am just a punter that actually lives in the region...
PS:  Heads up!  As annoying as Clive Palmer is with the games he plays with media, I would suggest that IF Clive ‘does something for Fairfax’, it would behove the ALP, Greens & others pay attention to the Sunshine Coast region as you can guarantee that nasty little ‘expectation that your MP will actually do something for you’ will spread and you too could actually smash the blue ribbon conservative group think here too.