Can the last person Left on the Right, please turn out the lights? 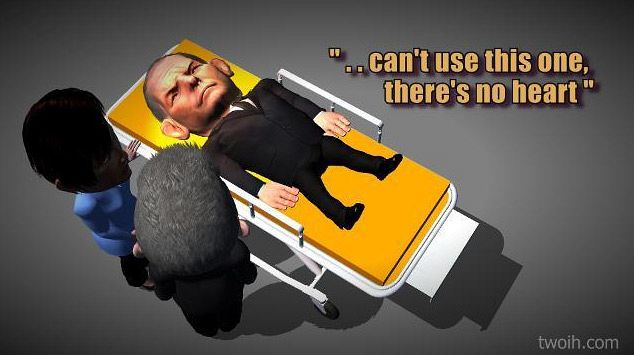 As usual, excellent creative courtesy of my good mate Rob ‏@TwoEyeHead, do yourself a favour & check out his site twoih.com

As a wise person just reminded me, Howard’s “Battlers” was political bullshit. But just because it worked as a ploy, it doesn’t mean the ALP have to reduce themselves to the same level just to win support, as it seems the likes of Marles and his so-called ‘Right faction of the ALP” are trying to do?

When I read pieces such as Paula Matthewson’s 'Like it or not, everything is politics' it rather depresses me. I understand exactly where she is coming from and don’t dispute her assertions, just rather depressed to see it confirmed in writing that the ‘political’ perception of an issue/party seems to have higher priority than the actual ‘reality’ of how a particular policy will affect punters or the target of that policy?

For me this came up again this morning with the Fairfax piece 'Labor's Left, Right quarrel over turning back boats’. Now, I may not be an ALP member but have quite a few ALP friends who are members. When it was first reported in media that Marles had suggested Labor "might" turn back boats when in government, they went ballistic on Twitter. I have also been to a number of local ALP branch meetings (in the capacity of talking about our NBN Senate Submission survey results) and was surprised to see the local members hitting up the Senator and MP that were in attendance in regard to Asylum Seekers. The branches I visited were most definitely not in favour of either Manus or Nauru off shore processing and for most the idea of ‘turning back the boats’ turned their stomachs.

So this morning when I saw that piece I actually tweeted, asking for any of the so-called ‘right’ of the ALP to let me know the ‘reasoning’ behind supporting turn backs. I was not trolling them, I honestly wanted to understand - I got nothing.

If you are an ALP member & support Boat turn backs can you let me know please? http://t.co/MKTiPFiOy2 Not hassling, Interested in reasoning?

This got me thinking, just who are the so-called ‘Right’ of Labor and why would they support turn backs?

With the Liberal National party it pretty much stands out like dogs business as to who is left & right there, but with the ALP, not so much… Though this piece ‘Understanding the Labor Factions’ did help to a certain degree, it certainly does not explain how there could be a ‘Right’ faction who supported Asylum Seeker turn backs when it seems to fly in the face of what the majority of ALP members believe?  Thankfully a lovely ex MP* actually had a chat with me on the phone to explain a lot of the Asylum Seeker, left right business.

To me, it does not seem that the so-called ‘Right’ of the ALP are actually of a ‘Right Wing’ ideology as such. More it seems they are traditionalists, those of the ilk who decided that the odious Mr Bullock should take precedence on the WA Senate ticket over the hard working Ms Pratt. The ones who believe that it is the right of long time Union Officials & Staffers to be given selection in safe seats as reward for backing? The pragmatic ones that fully believe that winning an election is more important than actually standing for something? They then just want to rinse & repeat, give the same bullshit reasoning to their party members about having to ‘be in Government’, yet in fact, what was the point? They didn’t do or achieve anything there?

With the recent death of Gough Whitlam, you would have thought it would inspire the ALP, and for some, it probably has. For others, it has only made it glaringly obvious that there is no brave politics now, there is no looking past getting their bums on a seat in parliament. No grand views for this nation, unless of course sanctioned by a particularly petty, yet extremely loud & far reaching segment of the media that tends to lead the nation by the nose with ‘Fear Factor’, ie where the Asylum Seeker & Terrorism debate has ended up. Or as the always sensible Mr Jonathan Green writes

“In the four decades since The Dismissal showed us the possibilities of winner-takes-all politics, we have witnessed the victory of pettiness and soundbites over vision and substance”

The Asylum Seeker issue is complicated, even for those with knowledge and experience in this area, so what hope for the average citizen? What I do know is that what we are doing and how we are treating them is not right, I know that in my gut. I am also not so naive that I believe like some that we can just open the doors and let whoever flood in. Well, to rephrase, I do think we could let more come to our country, though a policy of flinging the doors open wide alone is a bit simplistic and we would need to do a bit more homework to manage that in the best interests of ourselves and the new arrivals in our country. Sadly though, it would never happen anyhow, for starters the average punter groomed on Asylum Seekers taking jobs; being terrorists; jumping queues; hell even causing the traffic jams in Western Sydney... would not cop it.

What could be done though is to change the national conversation to “What could we do?”.
ALP know that they are on a hiding to nowhere with boats, so how about they work on taking that big stick the LNP love to whack them with out of the equation?

You have spin doctors up the wazoo on staff, get them working on other aspects of this issue? Honestly have a conversation with the public and your members, ask them how they would like this issue to be tackled? Talk and consult with experts? To be perfectly frank, Asylum Seekers are not an Australian problem, they are a world problem. Start in our own backyard and by backyard I mean Asia Pacific, encourage a few brave souls in the ALP to try to work with other MP’s of other nations in this region as it is their problem too?

Both the ALP & Greens will never be able to fight the LNP on Boats, the damage has been done.  Alas, until the ALP flick their hard right vs bleeding heart left in-fighting though, they will get nowhere and the LNP will be bashing them over the heads with Boats screeching for years to come. Only by changing the conversation away from the single issue of boats back to the “What do we do about Asylum Seekers issue” will either party make any headway.

It has been heartening this morning to see Bill Shorten state: "Labor is in favour of what works, what saves lives at sea, and Labor's regional arrangements have been working."  Though unlike others, I still feel this sort of statement leaves too much wriggle room, as in, yes they may not agree with “Tony Abbott's secret turn-backs” but come next election, what may Bill Shorten be forced to concede as being “in favour of what works”?

To the likes of Marles and his ilk, scared stupid by having the Abbott Govt hit them over the head with ‘deaths at sea’ rhetoric, grow up! Hell, admit you don’t know what policy is best to tackle the Asylum issue, put some effort into investigating other options, you already let down so many with your unqualified support for the ASIO Bill.

Trying to be a small target politically is not sustainable, nor ethical. I’m pretty sure your supporters, the vast unwashed in the burbs & regions could not care less if you are of the right or left faction of the ALP? If you carry on down this road, all the voters will see is the same old chaotic narrative, and more importantly, that you seem to stand for nothing. This could (will) result in you finding fewer and fewer members to assist in fund raising, candidate selection and of course to man your booths at the next election.  That would not be good for the ALP or for democracy in this nation.

Then again, what the hell would I know, I'm just a punter?

*As to the chat with the friendly ex MP, thank you, BUT my assertions above are not his opinion, they are my opinions fleshed out from the extra insight he imparted in regard to internal factional politics in the ALP.