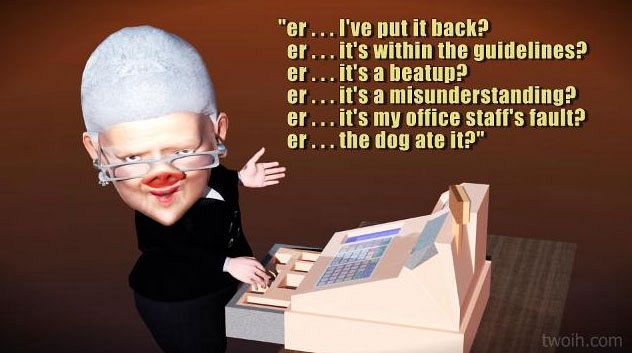 Rob's ‏@TwoEyeHead been on fire with #Choppergate, #BishopProbation & more. I strong you suggest you check out his Twitter timeline if you don't already follow him or of course his website twoih.com ;-)

I know this is going to sound a tad bizarre but we really should be thanking Bronwyn Bishop. Her chopper jaunt has highlighted the pathetic entitlement rules in a whole new light to the punter and detailed claims and counter-claims in regard to Ms Bishop’s crime/error of judgement – depending on which team you cheer for.  Joe Blow & Jill Dill are really starting to become educated as to “entitlements” & “official business”.

Let me explain. This sort of playing fast and loose with taxpayer funds is not new with our elected officials, though it does have to be said that Ms Bishop has taken the ‘entitled’ attitude to a whole new level. Every few years some intrepid journalist, or in the case of Peter Slipper, ambitious staffer, drops the ‘entitlement’ bomb on the public. Political parties go to town scoring points – all the time hoping they have no dodgy claims hidden away in their desks – the media try to analyse the hell out of the particular claim with an eye to ‘how it will play politically’. For us punters, we sit back at BBQ’s all around Australia seething at the bloody politicians in Canberra, Queensland – insert your state - Local Council, taking our hard earned for a ride.

Sadly, it always ends up the same, well a version of the same response. If the transgression is bad enough there will be an inquiry into ‘clarifying the rules’ headed of course by some eminent mate of Government. If the Government are struggling badly in polls, then heads may roll, nothing to do with severity of the sin, pure politics. Or my personal favourite:

“It is within the Guidelines”

Nothing makes the punter grind their teeth more than someone getting off from a dodgy claim than the ‘technically correct' to claim though to ensure there is no confusion it has of course now been reimbursed. How often have we heard it. Problem is, old mate at home doesn’t really know what the rules are, he sort of just has to accept if David Speers is telling me that it is within the rules, then I guess we have to cop it. Then of course we all sit around bitching about how loose the rules are and of course they (as in those Mongrels in Canberra) will never change the rules as the gravy train is just too good to get off in any hurry.

For those that read beyond the headline, the likes of Abbott apologising to his cabinet for being late as he had to pop into a Hospital to make his Melbourne fundraising trip legit make you fume. Point is though, as we all know, most of them do it. We know we could not get away with that in our jobs:

“Umm boss, I have a Triathlon to go to down in Melbourne, if I pop in & buy a coffee for one of our clients, you don’t mind if I claim the flights, transfers & accommodation on the business do you?”

Yeah right, like that would fly?? Not only would you be laughed out the door, your boss would probably be keeping an eye on you in future as he suspected you were a dodgy sort and what other scams were you trying to pull at work?

Bishop has years of experience, this sort of subterfuge to ‘technically’ be able to claim her lifestyle, with our money should be (appears to be) second nature to her. The fact that Bronwyn Bishop could not even bother to pop into a local Kindy and let the kids maybe swing off her choppers rotors for 10 mins while she pontificated about the future of Government really adds insult to injury. As far as the punter is concerned not only did Bronwyn waste our money on such a lavish extravagance, when we are being told “tighten your belts you bloody leaners” by her very own Government, she didn’t even make the slightest effort at even a veneer of having to justify it was “official business” with the Hospital, School, you name it, visit?

In fact it appeared that she was rather put out that she was even been questioned about it? The arrogance and 'royal we' was prominently on display when addressing the media, may as well have said:

“One does have more important duties than wasting precious time being answerable to the Australian public...”

Well that is what I reckon she was thinking when she fed the chooks so brazenly on the weekend with a press conference that could have been a skit from Open Slather it was that disconnected from reality.

Judging from watching Sky’s PM Agenda yesterday afternoon, it would seem the official 'spin' is going to be that as Bishop was talking about her roles as Speaker, it is therefore “Official Business”.

Now, I’m not sure the PM has thought this one through. As media keep telling me, Abbott and Bishop have a special relationship and he will try to ride this out with his ridiculous “She has been put on Probation” - whatever that is - but the chatting out there with the vast unwashed is “HUH! Slipper had the AFP up his clacker for less money”...

The PM may think Ms Bishop has been a wonderful servant of the Party (Liberal) and Australian People, but apart from her wealthier than average electorate, she is just not a likeable character with the vast unwashed. In fact, most punters are pretty sure she would not deign to ever come down to their level to have a chat with them.  So a quiet little investigation by the Finance Department that may be forgiving due to her repayment won’t cut it.

The PM has no-one to blame but himself. Thousands of hours of media coverage were devoted to Slipper so the public is a tad more informed about the whole:

“OMG Slipper signed a form claiming he spent our money on official business! That King Rat is toast”

Ms Bishop is in the same situation now. Saying that she was giving a speech about her role in Government and Finance deeming that makes it “Official Business” would open the floodgates.

It would be pretty hard to find a politician of any flavour that does not talk about his role in Government every time he is the centre of attention.  So the only way I can see that Ms Bishop could get away with that line being “Official Business” even when that “brag about my job” speech is at a political fundraiser would then mean that ALL attendance and speeches at political fundraisers could be claimed as expenses? Political party membership is declining. The average punter already has a low opinion of party games, so do you think they would really cop us, taxpayers, funding all their political fundraising efforts?

Our Politicians actually earn very good wages. The fact that they earn these decent wages and have entitlements is not something I begrudge. Most in fact work very hard and deserve every cent. Having said that, besides the wage they also get a great super package and of course the connections to ensure that they are never out of a well paying job again in the future once they leave office. Taking that into account, there is no need to rip us off with unnecessary charters or paying for them to attend political shindigs. It is human nature to get the most of our of any opportunity. However, it is also human nature to despise and want justice when we are stolen from or lied to.

The attitude of “well what do you expect it is a politician” already allows our elected representatives to get away with a hell of a lot more than we would allow from those we personally interact with on a daily basis. The dodgy overseas ‘study trips’ are questionable enough. We don’t like them, but don’t have enough knowledge to fight them. We hate the technicalities they use to get off what is essentially fraud. We hate the fact they can just pay back Finance when they get caught claiming incorrectly, more than once, with no ramifications, when Centrelink or the ATO will grind a punter into the ground for a similar mistake (but a lot less money) – if not jail or bankruptcy.

BUT asking us to pay for the likes of a pretentious politician to swan around with the political elite to raise funds just so they can get back into Government for another term to screw us over again is just taking the piss!

P.S. In the most royal of voices "we the people are not amused, #BishopProbation will just not do" ;-)