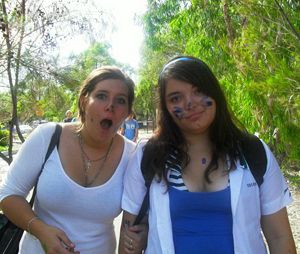 The only photo we could find of them together, sorry girls, know you like to look better. Thanks to Courtney De Cent for the photo.

It’s hard for young people to have fun. Friday night comes along and myself and all my friends want to go out to have a good time, just all being together and celebrating our youth.  But not on the Sunshine Coast.

I’m 17 living in the beautiful tourist destination of Noosa!  The name lives up to its reputation, it is not cheap, anything to do in Noosa on the weekend is expensive.  Go to The J, where all events cost to get into, the movies, which take a good chunk out of our part-time pay.  Most kids on or around Noosa find it hard enough just to get a job.   Oh and let’s not forget the unreliable bus system.

So now us teen aged youth from 15 to 17 must resort to trying to entertain ourselves at places like the river, which most parents don’t think is suitable for their kids to be hanging out at, at such late times. The areas on the river which we most hang at are not lit, and the streets are patrolled by police thinking that we are up to no good, which because there is nothing to do, we sometimes are, this makes an uneventful night.

The second destination of choice is the beach, which not even 30% of kids live close to, causing the other 70% to over pack their cars and some even drink drive due to the consequence of no suitable cheap places for teens to hang.  If the police have reports of youths loitering on the beach, within a heartbeat they are there, thinking that they are doing the wrong thing.  Although most of us aren’t even drinking, just hanging around a fire having a laugh.

I hear of the times in my parent’s youth when the beach was a free place to party around a bonfire and the local surf clubs used to hold all age dances which were enjoyed by all.  I think it is unfair for us teens to live in such a beautiful place and not being able to take advantage of the beaches and river and the lack of free underage events on most weekends.

Noosa is an amazing place to live in, but not so amazing to grow up in. There is nothing to do! And going to the beach every single day in the holidays gets a bit tiresome. Unlike my other friends and peers, my friends and I don’t like to “party” or go out ALL the time which is good for us being in Noosa, and at least had a positive effect on my studies. For someone like me it feels like all I can do in Noosa is study, stay at home or go to the beach (on a sunny day). We can’t just casually go shopping at decent places because that’s a one hour trip on a bus that hardly runs. We can’t just go walking and window shopping in the junction because there are no shops anymore or in Hastings Street because it is way too expensive (or you get kicked out of a store that sells beach wear, that is 10 metres from the sand, for not wearing shoes as of just coming back from the beach!).

I also have a boyfriend, whom luckily enough am trusted to be with at his house because there is honestly nothing else we can do, or any place we can go without spending a LOT of money!

One thing that isn’t an obvious issue for many teenagers I know is not just activities and entertainment in Noosa but medical facilities.  For the past 5 years I’ve had to make trips to Nambour, relying on my dad to take time away from work, so that I can get my check-ups at the hospital. It wouldn’t have been so bad if it wasn’t, as it was at one point, an almost fortnightly occurrence.

Noosa will always be my home and I will always come back here but at the moment, as a 17 year old finishing high school, Noosa seems like this black hole that is full of people wanting to escape, with no real opportunities, but don’t worry because there is a great view.

As it has been School Holidays and Em has been working with us a lot, we thought it would be interesting to have a teenagers perspective on the Coast.  No real criteria was given for an editorial, basically, your call girls, if you could do an editorial what would it be about?  Caitlin is our daughter, who has also been working for us and basically had the same mission handed to her.  The above is what we got from them both.  Without talking to each other about it, and being totally different types of kids, one is more science and sociable, the other is more music and quieter, we got a pretty similar scenario from them…

Now, I would have to say, thinking back on my teen years, growing up in BrisVegas, we did actually have quite a few things we could do, even with some things costing, it was a lot easier to get a part-time job, just about every kid had one, so you could afford to pay for the odd band in Albert Park, or to go to ‘town’ to the movies.

I remember when Council first proposed building the J, there was even a competition for naming the new youth facility.  Obviously it is not considered economically viable to have too many free youth events now that it is actually built, and I am sure the dreaded public liability which is a scourge on our society makes doing anything for kids there even more expensive, but maybe we should be looking at this issue more seriously.

Kids seem to be the only ones here on the Coast that don’t really have a voice about the future direction of the Coast.   Having a child grow up here myself the old Noosa Council did a lot of free youth events that surrounded the bigger sponsored ones, they were welcome at the Library, Gallery, and Noosa Community Radio (they still are to a certain degree), but with a Mega Council now, concerned about ‘Big Ticket’ items, (just like the neglect of small businesses here on the Coast), the kids are also being left at the kerb.  Maybe in all the planning with the expensive consultants, they should take a ‘time-out’ and have a chat to a few kids as well?