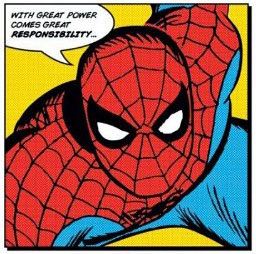 Benefit of the Doubt on "Doing Important Things For Australia"

Not talking about Tony Abbott here (well not directly), more about the state of our media. Unlike the new NRL rules, I will give our Journalists the benefit of the doubt.

Not talking about Tony Abbott here (well not directly), more about the state of our media.  Unlike the new NRL rules, I will give our Journalists the benefit of the doubt.

News is important, it shapes how we vote and how our country is run.  To my untrained eye and experience when it comes to important issues,  it seems that Facebook is more lightweight, Twitter is more passionate, Google + is still an undecided work in progress, Newspapers are selective and conservative and Television news (in general) is the lowest common denominator.  These mediums are all going for particular markets, yet, it seems to me, that the biggest market out there is not being serviced ethically at all, The punter, as in, the busy silent majority.

I like social media, love how it can sometimes rally for causes, but when it comes to actually setting agendas for discussion or highlighting politics in this country, the newspapers rule, particularly as the news is normally just bite-size highlights of the news of the day according to the Newspapers.  This was brought home to me at a recent party we had.  We have a good cross-section when it comes to our friends, single, middle-aged, 30’s, older families, younger families, single mothers, divorced, some wealthier than others, some working for companies, some self-employed, you name it...  the only things they have in common is they are all busy with life in general.  This means the only news they actually see is the odd paper left on a table at lunch-time, the good old weekend paper and the nightly news (though not religiously), therefore their perceptions on Government are well and truly formed via the mainstream media.

For a number of years I have felt very let down by the mainstream media.  Too often I have felt they are making the news, not reporting it, too often they are ‘selective’ in their reporting, “Telling” the punter what is important though not explaining “Why” it is important?  This though is where I will give them the benefit of the doubt that there is not really some sort of conspiracy to keep us all dumber, but they are in fact victims of their own culture, just like any other professional group.  On the weekend at a family Christmas lunch I was talking to my cousin about the issues with so many foreign doctors here.  It was enlightening as to just how unaware my cousin was as to how actual patients felt.  Suffice it to say that the people she associates with both professionally and socially, mixing almost exclusively in the medical profession, means she rarely actually just talks to punters.  It is not being elitist, just the way it rolls in a busy non-stop profession and had not actually stopped to consider what the ‘average punter’ actually felt or experienced, more concerned with the details of the profession.

I would say that Journalists are most likely very similar, particularly with the 24 hour news cycle that we now have.  As they are very much in the ‘know’ politically they sort of assume everyone else is aware as well.  I have spoken to a few Journalists and they seem to assume that the general public is a lot savvier.  The mantra of “Julia is a Liar” is a relevant example.  This has been repeated so often that it is now seemingly a ‘fact’.  When you actually ask a punter – “Why is Julia a Liar?” – They can’t actually give you a reason, just, “Well it is always in the news & papers...”.  In fact it is not what the media always say, it is just what they hear the opposition saying and the media don’t call them on it, they choose to show or reprint that part of a press conference, thereby perpetuating it.  From what I have actually seen she is no more dishonest or honest than any other politician.  Most Journo’s tend to agree as well, though pre-cursor with “That is just ‘strategy’ or ‘the political game’”, “People aren’t stupid, they can make their own minds up” – actually no they can’t, they may not be stupid but they are time poor, therefore ‘the journalist’ shapes their opinion.  Obviously the Journo’s and the Pollies are all in on this ‘spin game’, unfortunately the punter is being taken for a mug as they don’t actually know the rules and are innocent bystanders.  This is a serious problem, punter opinion in general is "If it is in the News, then it must be true!"  A few examples from the recent barbie will illustrate what I mean.

Note, all these people do live on the Sunshine Coast, though the majority come from other areas of the country or overseas, The are the “punter” , the average family, worker, busy person, you know the one who is working long hours, stressed about job/kids/family/money with no time for detail or dreaded 'context'...

Slipper is Bad
Yep, that is the majority opinion.  When asked why...  “Well the Sunshine Daily always has him on the front page, they wouldn’t do that if he was not bad” or “He is dodgy”.  When I piped up with, "you know he has been investigated a few times and never been charged with anything, plus many many MP’s have at some stage had to pay back expenses due to incorrect reporting", the consensus seemed to be, “Are you sure about that?  He must be good for it, the papers would not keep calling him ‘Slippery Pete’ if he was not dodgy”?

Brough is Good
Also the pub poll majority opinion.  When asked why... “Well the Sunshine Daily always write good articles about him, so he must be good, they don’t bother to write about others”.  When I mention some of the disparaging comments from Rares in the Ashby case, and this is very very important for Journalists to note, the majority comment was basically “Well it must have not really been a big deal what he said as if it was something dodgy then the papers would be reporting it?” or “well the papers are pretty quick to pick up a scandal, even if it is not important, and they are not bothering to mention it all so are you really sure that your not just getting your information from some lefty blog?”  When I say no, I actually read the full report, after the comments of “OMG you need to get a life” it then went on to...  “Well obviously that Judge was out to get Brough because if he really has done something dodgy, well wouldn’t it be all over the papers, particularly the Daily?”

Are you seeing a theme here?  If it is important to Australia, if we need to know, it will be in the News!

Journalists have serious power in informing the general public.  In a region like the Sunshine Coast we can’t do much about the monopoly the local paper has (hoping one day this region will be better connected with more actually getting their news online instead), in the meantime, though they are not the only influence the TV News takes when it comes to reporting the news...  Maybe, like other professions our Journalistic fraternity should spend a week or so a year with the plebs, back on the streets, interacting with average joes  to become aware of what the public’s real concerns are, what the real attention span is, most importantly how much background knowledge the punter really does have (not much, most would not even be able tell you what our Senate does!) thereby reminding the Journalist just how much power they actually do wield.  As the famous saying goes: “With great power, comes great responsibility”.

We don't have time to ask the questions, hell, half the time we don't even know what questions need to be asked.  You, the journalist have the inside running on that, so please, maybe remember us, or remind your editors that we exist, we need more info and we need you to be highlighting what is important to us, all the time and without bias...

Then again, I am just a punter, hanging out with other punters, so what would I know?