Battle of the Sunshine Coast Libs, the only game in Town, Why is it So? 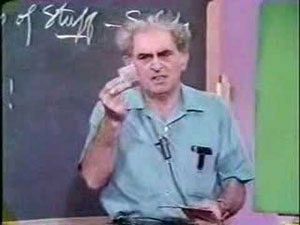 The legendary Professor Julius Sumner Miller, famous for "Why is it So" you might ask?
Like a lot of people, the drama's of last week fascinated me.  I am one of those that loved Julia's speech.  Before anyone (particularly guys) start to lecture me on how I did not understand the 'political context', stop right there, I did!  I just didn't care!  I think a lot of women would have been similar had they watched the whole speech, thinking of every time they have been dismissed out of hand, though that discussion is for another forum, such as a chat with friends on the deck with a glass of wine, not here.

What is important to us here on the Sunshine Coast is that the concerted campaign (he may be called all sort of names, though you have to remember, both during his time under Libs & ALP he has never been charged with anything, would hate to see the persecution if he is actually charged with any offence), against Peter Slipper has come to fruition and he has now stepped down from the Speakers chair.  Though he is still currently in Parliament as an Independent, though I am sure there are quite a few hoping there will be a by-election for his seat, so that Mal Brough can get into his seat even earlier than planned.  We also have Liberal nominations on the go for Fairfax as Alex Somlyay is retiring, which is interesting as there seems to be a heap putting their hands up, as per the Sunshine Daily article "Contenders pad up to do battle for federal seat of Fairfax".  So very interesting times ahead for the Liberals, as let's face it, they are politically, the only game in town here, and have been for decades, and unless something changes drastically will be for decades to come.

In the words of the fascinating Professor Julius Sumner Miller (yep showing my age) "Why is it so" you might ask?

No-one has ever been able to sufficiently explain to me why the Sunshine Coast (except for that temporary flirtation with Cate Molloy) always vote for the Liberal National party?  Before we go any further, I am not a supporter of ANY Political parties.  I personally do not find them to be democratic in any way, shape or form and really don't understand how we can all be lumped into two distinct groups, (really?  there are only 2 types of people in this country, either left or right learning, or Liberal vs Labor?) sorry, I have never been a Ford vs Holden girl, I really do prefer to have a bit more choice.

I would like to explain that this is a very serious question I am asking and would love the feedback.  I'm not just talking about choices in recent times, but why for decades and decades has this ongoing Liberal National voting been the trend on the Sunshine Coast at all levels of Government?

As far as I can see, the Sunshine Coast has never really received it's fair share of Government money for infrastructure & services from both State or Federal Governments and it doesn't seem to matter if the Libs are in power or not, we still don't seem to get much? (for a comparison try looking at a similar population size city like Townsville)  Some food for thought below as to why we keep voting the same way...

Basically, after seeing so many 'same old same old' type comments on the Daily's "Readers, Brough say it's time for Slipper to quit politics" article, it really has got me thinking, WHY?  So let me know.  I don't mean the same Julia is a liar rants or Tony is a sexist pig screaming, seriously, this has been happening for decades, so why?

I don’t want anyone thinking that I am having a go at the Libs, I am not, just honestly wanting to know what has traditionally always made the Country / National / Liberal / LNP party the way to go here on the Coast, and I don’t mean from a political rhetoric point of view.  Most people I know of who all vote for them are not political, the most common theme seems to be “Well, we always have”, so I am asking Why?  What is it about our makeup, history, demographic etc., that makes that so?  Help me out here?  Why do we only vote the one way here on the Sunshine Coast?

Like I said earlier I have no party affiliation here.  I like to have choice.  I don't believe that everyone can be categorised into twelve star signs so why do we predominately only look at Labour or Liberal/National, this means there are only 2 types of people?  Worse, as we only vote Liberal/National does that mean we only have one type of person on the Sunshine Coast?

Let me know through the below comments section.  I would love to hear your reasons, or thoughts on the matter?  Obviously I have no idea :)