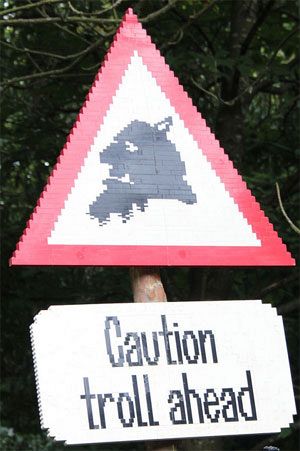 There has been a lot of hooha over social media recently,  twitter in particular, and personally I find it a little ummmm dramatic.  I mean no offence to the odd person who has truly been attacked by ferals using social media, them I feel for, but celebrities?  Seriously?

I am the mother of a teenage daughter so know about bullying, ‘real’ bullying and the effects it can have, and have to admit that the media focus on the likes of celebrities’ who scream blue murder when they are targeted by trolls* (addressed below) is pretty offensive.  The attention paid to them by mainstream media is seriously concerning.  It is almost hysteria.  Have you ever noticed that the people who are currently crying foul about being trolled, ie. Charlotte Dawson, Robbie Farrah, Ray Hadley etc., are actually quite aggressively opinionated people in the media (particularly online), who have put out very confronting tweets on their twitter accounts in the past?  I am not condoning what the trolls have said, some of it is inexcusable, though, you have to think, that if the people in question had not been so confrontational in the first place would the trolls have bothered targeting them?

Basically, if you were to walk into a pub, puff your chest out, pontificate loudly on your views of the world, do the whole ‘look at me, look at me’, type thing, you will be harassed and knocked down to size quick smart.  A lot of trolling is just bitter people who have access to a computer.  Instead of someone seeing a celeb on TV and ‘thinking’ “your a moron”, they now get straight on their phone and state “Your a Moron” on Twitter...  It is sad, but the anonymous keyboard warriors who seriously need to get a life are not going to go away in a hurry and unfortunately often hunt in packs.

One of my favourite Australian authors, John Birmingham, wrote a very good article recently that puts a bit of dampener on the latest media ‘trolling’ hysteria “Time to take a deep breath before jumping on trolls”, worth a read.  It is a shame that Twitter does not have the same systems in place to deal with Police & Local Authorities like Facebook has (actually, Twitter is a typical Internet issue, being US based, they don’t care too much about other countries laws – same as spam – and are very slow to even acknowledge an issue unless it affects them legally in the US)  There have been people prosecuted for trolling on facebook, as the referred to article above describes, and as time goes on there will be more.

The focus on the dramas of the likes of the Charlotte Dawson’s of this world, really gets up my nose.  There are teenage kids out there, who are in a NO WIN situation, they have the peer pressure to be involved in social media, yet often do not have the skills to actually handle it, particularly when a bad situation rapidly spins out of control, BUT, if they are not involved, they also get trashed for it as the ‘weird loser’ who is out of the loop.  They can’t win, and even though you tell them they really don’t have to be there, they don’t believe that.  A lot of what is said online is crushing and thoughtless and difficult for a parent to help with.  These ‘new’ types of communication were not something we ever had to deal with, if we had an issue with someone at little lunch, it was all over by big lunch generally and totally forgotten the next day – kids know we can’t trot out an empathetic story to help them feel better and therefore consider most advice an adult would give on trolling as redundant.

Celebrities on the other hand are adults, have minders, advisers, and all sorts of resources to call to hand to combat trolls, our kids don’t, so I find the likes of the ‘poor me’ celebs in the media really belittling of what is a serious issue and the mental health issues that arise from this increase in trolling are far too complicated to discuss in a blog.  The fact is, we do have laws in place, and if you are trolled beyond acceptance you can do something about it.  Even if you don’t want to go the legal route, you can just ignore the troll, block the troll and of course there is always the trusty DELETE key.  Seriously, you don’t have to be on facebook or twitter, and you can always use them as you wish, they are just pieces of software, that is all.  I know many people who have private accounts on facebook so that they can only interact with their family, or like myself, I don’t ‘tweet’ at all on twitter.  I tend to use it as an information feed for the Queensland Police, news, a couple of comedians I like, my favourite Rugby League teams (I need all the help I can get for my fantasy football team LOL!), hell, I even get a giggle during the day with my current favourite, @SarcasticRover .  You can passively be part of both these forms of Social media, you don’t have to actively participate.

The whole trolling trend is unfortunate to say the least, I don’t know if it says more about the level of unhappiness of a lot of people in our society then it does about the internet itself?  It is also complicated.  In the end, you need to sit back and put it in perspective, what a nasty says to you on the net is really just what someone was ‘thinking’ in a real life situation, because you don’t physically hear or see that ‘thinking’, you are not bothered, so you need to treat the troll in the same manner, pretend they don’t exist and sure as hell don’t feed them by retaliating, seriously that zinger you shoot back on twitter might give you a few minutes of satisfaction, but the grief that can follow from the troll calling in trollish reinforcements (or as my Husband would say “think men vs orcs at the battle of Pelennor Fields below Minas Tirith before dawn”) to take on the challenge is not worth it.

The best advice I can give anyone who is concerned about the social media hype is the same advice I always give, educate yourself, (the sensational media host on the morning TV show is NOT education), talk to a REAL expert, ie. The 18 year old down the road, the true user of this medium! If in doubt, just turn the bloody thing OFF!  Shock horror, you can do that!  Or be like me, sit back and see what funny comment Sarcastic Rover has to make today, he is getting rather lonely up there on Mars :)

Best of luck in the online social media world, any advice you can give others, feel free to comment below and maybe help some others...

As per Wikipedia* “In Internet slang, a troll is someone who posts inflammatory, extraneous, or off-topic messages in an online community, such as a forum, chat room, or blog, with the primary intent of provoking readers into an emotional response or of otherwise disrupting normal on-topic discussion”.
** Note, Wiki is not normally the best reference for most things of a factual nature, though when it comes to the internet and popular culture terms, they pretty much get it right.