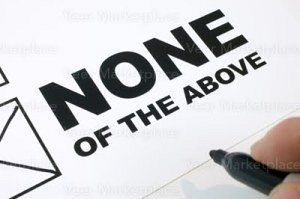 ALP, Coalition, Green or OTHER?

Mathematicians are happy campers this week, having Nate Silver show that true scientific analysis of polling data is more accurate than the so-called expert opinion...

Mathematicians are happy campers this week, having Nate Silver show that true scientific analysis of polling data is more accurate than the so-called expert opinion.  That I am happy about, what I am not happy about is that the new profile of polling (which has been highlighted in this country) means that the likes of Newspoll  will be given even more media space.

I don’t doubt that Newspoll is accurate, what I hate are the questions asked.  Who decided in this country that we are only supposed to have 2 political parties (with the Greens or other seemingly there just for nuisance factor)?   When doing Ancient History in high school I don’t remember ever being taught that Democracy could only be 2 parties?  It is always the same questions in the polls (regardless of company), Two Party Preferred, Primary Vote, Better PM...  This has been going on for so many years now that it has basically conned the public into believing that there is only 2 choices, only 2 choices are ever discussed, even if you do want to vote for ‘god forbid’ someone other than the big Two then it is a ‘wasted’ vote.

How about they ask a few other questions...

If an election was to be held tomorrow, who would you vote for?
ALP
Coalition
Greens
NONE OF THE ABOVE

I wonder, seriously wonder, if the poll was not just marginal seats, but a random sampling Australia wide, what the result would really be?  A pub poll on our back deck voted overwhelming ‘None of the Above’?

I wish we could go back decades, where yes there were still larger parties, BUT, as my Modern History teacher taught us, they did not always vote on party lines, there were a lot more Independents and smaller parties, and they only ever voted with the larger parties IF the particular party’s legislation being put forward was suitable for their own particular voter bases.  They were never locked in as BFF’s for ever as they are now?  That would be democracy.  Or at least a step closer to it than what we have now, which is looking way too much like the US system at the moment?

Seriously, as a punter, what is wrong with me wanting my elected Representative to actually represent me and the majority in my electorate? I wish someday some really really rich person (maybe you Clive, you are doing well taking them on Qld), would actually take a pollie to court for misrepresentation?

Think about?  You live in an electorate where they are overwhelmingly in support of say...  gay marriage?  your member of parliament, says he ‘as a private individual’ is also ok with it, BUT, his ‘party’ is against it, therefore he votes against it!  What should his responsibility have been there?  His electorate or his party?  Personally I think it should have been his party, we are his bosses, he is there because we voted for him, so if all investigative data shows that the member has gone against the wishes of his electorate then why can’t we sack them there & then?  I mean, they did mis-represent themselves, they said they would be ‘OUR’ voice in Government and they weren’t, they were the voice of the ALP/LIB etc., ?

Federally where I am is on the edge of a large electorate and our Federal member is way off base with how my area feels, State wise, our member is a decent bloke, very much in tune with our area and from personal experience, I know he really does care about our area, BUT, I could not support what our Premier is doing to the state (particularly when it comes to Education & Health), and I know my local member probably really can't do much about that.  Therefore, from what I have seen over the years, Independents tend to be more inclined to know their electorate.  They actually do represent the wishes of the electorate, so maybe we need more of them?  Either way, would be nice to break down the power of the big two.  Come on Pollsters, ask some more questions, toss in the NONE OF THE ABOVE?