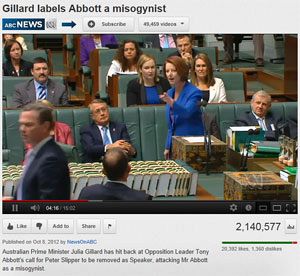 Many of you may not be aware that today, the 19th of November is actually International Men's Day, and the theme for 2012 is - Positive Male Role Models.  I for one can see a lot of irony in that theme in the ‘context’ (gee I love that word NOT!) of the Gillard Smackdown last month.  Even the most politically uninterested person soon became aware of the doozie of a verbal slap delivered to Opposition Leader Tony Abbot by Prime Minister Julia Gillard in Parliament  on the 8th of October 2012.  If you only saw it in sound bites on the news, I strongly suggest you actually check out the whole shooting match “Gillard labels Abbott a misogynist” that ABC News uploaded to YouTube.  I know you may think that 15 mins is a long time, seriously, it is worth it.

The reason why I mention this is that so many people saw this speech in a different way.  Many thought she was ducking an issue, some thought it was political point-scoring, some were impressed, some, like myself, actually listened to her for probably the first time.  I am sorry, I know it is shallow, but for some reason, I start to hear her speak and my head just goes blank with ‘blah blah’...  Anyhow, we played it in the office, not one person spoke the whole time.  I was stunned, and have to admit, had goose bumps a few times.  My husband, was shocked, not believing she basically told him to shove his attitude up his Khyber.  Even the 18 year old guy in the office was like “OMG!  That is one angry ginger ninja”...  As a 40 something female it definitely struck a chord with me and a lot of other women similar to me.  For a lot of women this speech has nothing to do with politics at all.  A lot of us just got a vicarious thrill from watching one female authority figure give a male authority figure a thorough 'dressing down'.

See we grew up in the generation that benefited from what other women had done in the 60’s, therefore we thought we were actually equal, it was what we were told at school, how we were treated.  Then we hit the workforce and found that was not the case.  The Sexism may not have been as overt as days gone by, though still exists.  Every woman who has ever had a client looking at their breasts instead of their face while speaking to them, or every woman who has been subtly side-swiped in a business conversation with deference given to the males in the room knows it, has felt it, has silently fumed.  The kicker is, if you actually say something, you then look like a drama queen, hence you keep your mouth shut and store it up.  Yes men, I know, most of you have that complaint about us females storing up crap for years, sorry, obviously it is in our DNA.  Therefore the Gillard Smack down really resonated with many of us.  What was bizarre, was waking up the next morning, to have all these TV Presenters and reporters in papers tell me I was wrong.  The speech was not that important.  Worse, if I did think it was important, “I had missed the context”, or “I didn’t understand the context”.  You know what?  I did understand the bloody context, I just DIDN’T CARE!  In fact, I was probably jealous that I had never had the opportunity to do something like that in the past, to stand there and take down an old boss, tossing out every slight I had received and the speeches I had practiced in my head while I fumed on the train home, lying in bed at night or even on the bloody toilet where you have gone after a 'potential' drama for that piece of quiet to pull yourself back together again to face your work-mates and pretend nothing happened, as you do!

This is where my ‘Tale of Two Men’ comes in.  With the plethora of articles I read, there were two stand-outs for very different reasons and I think they give ‘context’ to the theme for International Men’s Day this year “Positive Male Role Models”.  Let’s see if you can pick who I think would be the better role model for a young boy nowadays.

The first standout was Mr Paul Sheehan, “Gillard reveals true nature in playing gender card”.  I seriously suggest you read this, maybe not if you are a female on blood pressure tablets.  Now this man, as per his précis, is a ‘Sydney Morning Herald columnist who has been a Day Editor and Washington correspondent for The Sydney Morning Herald’.  Educated man you would think?  Well versed?  An articulate writer?  Well, Mr Sheehan, littered his opinion piece with nastiness and name calling that I would have associated with a 12 year old boy throwing a tantrum.  It was appalling, just some of his petty comments in relation to our Independent MP’s, and I am quoting here “Mr Insufferable, Robert Oakeshott, and his fellow regional zombie, Mr Unspeakable, Tony Windsor”?  Yep, seriously?  It is irrelevant whether you like these MP’s or not, to speak so disrespectfully of them in a national forum is just plain wrong!  Now, yes the piece does state it is an ‘opinion’.  Unfortunately many older readers who are new to the internet, still have a lot of respect for newspapers, with the old adage, ‘If it is in the news it must be true’, therefore this tirade would have been given a lot more credence than it should have by a larger older population.  Where most of the sexism comes from, something to ponder?

On the other hand, we had Mr Greg Baum with his “'Now, listen here, luv' - when words become weapons” on the 15th of October.  Another opinion piece.  Now Mr Baum is identified as ‘Chief sports columnist and associate editor with The Age’.  Ahh, a sports writer and male, you would assume it would have been a blokey piece, maybe not as pointed and nasty as Mr Sheehan’s though still with that ‘females do not need to be respected’ type attitude, as unfortunately that is what we see a lot in sport nowadays and too many sports journo’s feel compelled to give sporting identities a lot of leeway with the old ‘boys will be boys’, or ‘sportsmen should not be considered role models’ type rubbish.  Anyhow, imagine my surprise, and delight, to read a well-thought out piece, telling a tale of an incident his mother was involved in, illustrating the subtlety’s of the sort of sexism the females in his life were subjected to.  This man obviously has a lot of respect for his mother and obviously ‘got’ the context that mattered to me (just as my husband and other younger males did).  My bad for jumping to a sterotyped conclusion about a sports columnist and I profusely apologise to you Mr Baum for making that assumption :)

So how does this work?  How is it that one man could understand what many of the women in this country (and internationally) saw in this speech.  As stated in Greg Baum’s opinion piece “Sometimes, a speech has meaning and resonance far beyond its context”, correct!  Therefore, on this International Men’s day, in the ‘context’ of Positive Male Role Models, who do you think of these two men you would want your son to be reading or looking up to as a Male Role Model?  I know who I picked.  In the correct context of course...  Then again, it is also World Toilet Day, so maybe both men could get a gong?